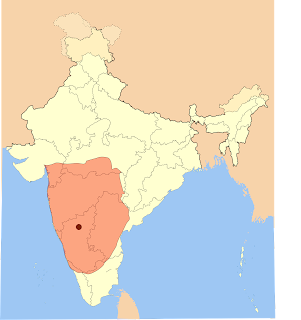 Pulakesi I and his descendants, are referred to as Chalukyas of Badami who ruled over an empire that comprised the entire state of Karnataka, Telangana and most of Andhra Pradesh in the Deccan.

Pulakesi II whose precoronation name was Ereya was perhaps the greatest emperor of the Badami Chalukyas. Immadi Pulakesi (Immadi in old Kannada means "II") is considered as one of the great kings in Indian history. His queen Kadamba Devi was a princess from the dynasty of Alupas. They maintained close family and marital relationship with the Alupas of South Canara and the Gangas of Talakad. Pulakesi II extended the Chalukya Empire up to the northern extents of the Pallava kingdom and halted the southward march of Harsha by defeating him on the banks of the river Narmada. He then defeated the Vishnukundins in the southeastern Deccan.

Pallava Narasimhavarman however reversed this victory by attacking and occupying the Chalukya capital Vatapi (Badami).

The Badami Chalukya dynasty went in to a brief decline following the death of Pulakesi II due to internal feuds. It recovered during the reign of Vikramaditya I, who succeeded in pushing the Pallavas out of Badami and restoring order to the empire. The empire reached a peak during the rule of the illustrious Vikramaditya II who defeated the Pallava Nandivarman II and captured Kanchipuram.

After the rise of the Rashtrakutas the Chalukyas of Badami went in to an eclipse to be recovered in the tenth century C.E. by Tailapa II (973 – 997) C.E. These later Chalukyas ruled from Kalyani. They were in constant conflict with the Imperial Cholas over the control of the Eastern Chalukya kingdom of Vengi. The Western Chalukyan power finally succumbed to the Hoysalas and Yadavas after almost three hundred years of glory. Somesvara IV (1184 – 1200 C.E.) was the last known Chalukyan ruler. Some of the most beautiful architecture and literature were developed by Chalukyas. It was a combination of the South Indian and the North Indian building styles.

Kirtivarman I was overthrown by the Rashtrakuta Dantidurga in 753. He was the last Badami Chalukya king. At their peak they ruled a vast empire stretching from the Kaveri to the Narmada.

List of Badami Chalukyas:
*Pulakesi I (543 – 566 C.E.)
Pulakesi I established the Chalukya dynasty in then western Deccan and his descendants ruled over an empire that comprised the entire state of Karnataka and most of Andhra Pradesh. Pulakesi overthrew the Kadambas to establish the Chalukya kingdom. He had the titles Satyashraya, Vallabha and Dharmamaharaja.

Pulakesi I was Ranaranga's son. His wife was Durlabhadevi of Bappura family.He earned the distinction of being the first independent King and the real founder of the Chalukya dynasty. He successfully defied the waning power of the Kadambas and proclaimed the Chalukyan independence. He chose Badami (Vatapi) as his capital and constructed a strong hill fortress there. The new fortress stood on the defensible location surrounded by rivers and steep mountains. The Chalukyan kingdom did not extend much beyond the immediate vicinities of Badami.

*Kirtivarman I (566 – 597 C.E.)
Kirtivarman I succeeded Pulakesi I as the ruler of the Chalukya Dynasty.
Kirtivarman I consolidated the newly founded Chalukya Kingdom. He completed the subjugation of the Kadambas, and he secured the extension of the Chalukya Kingdom by subduing the Nalas of Nalavadi, the Alupas of South Kanara and the Maurya chiefs of Konkan.
He also annexed the port of Goa, then known as Revatidvipa. The Sendrakas, the feudatories of the Kadambas who ruled in Shimoga district, now shifted their political allegiance to the Chalukyas, and married a princess from this family.

At the demise of Kirtivarman, his son Pulakesi II was too young to rule and Kirtivarman's brother Mangalesa assumed the responsibilities of the crown.

*Mangalesa (597 – 609 C.E.)
Mangalesa was an energetic and ambitious ruler succeeded Kirtivarman I to the Chalukya throne. He ruled as regent as the heir to the throne Pulakesi II was considered too young to rule.
Mangalesa won several laurels in war. Mangalesa continued the policy of expansion. He invaded the territory of the Kalachuri ruler Buddhiraja who ruled over Gujarat, Khandesh and Malwa. From the Mahakuta pillar inscription of 595 it is known that he subdued the Gangas, Pallava, Chola, Alupas and Kadambas rulers.

Mangalesa assumed the titles like Ururanaparakrama, Ranavikrama and Paramabhagavata.
As Mangalesa was ruling as a regent, he should have surrendered the throne to Pulakesi II when the latter came of age. Instead he sought to prolong his reign with the view of handing the throne to his own son Sundaravarma in due course.

This forced Pulakesi to rebel against his uncle. Pulakesi left the court and by his own martial prowess, waged a war on Mangalesa with the help of few of his friends. Mangalesa was routed and killed in the battlefield of Elapattu-Simbige. This incident is mentioned in the Peddavadu-guru inscription, and the incident must have happened about 610.

*Pulakesi II (609 – 642 C.E.)
Pulakesi II is the most famous ruler of the Chalukya dynasty. In his reign the Chalukyas of Badami saw their kingdom extend over most of the Deccan.

Ereya, who assumed the name Pulakesi on his coronation, was born to the Chalukya king Kirtivarman I. When Kirtivarman died in 597, Ereya was still a young boy and Kirtivarman's brother Mangalesa governed the young kingdom as regent until Ereya came of age. Mangalesa was a capable ruler and continued expanding the kingdom. However, when Ereya came of age, desire for power perhaps made Mangalesa deny prince Ereya his rightful place on the Chalukya throne, and he sought to perpetuate his own line by making his son heir apparent.

Ereya took shelter in the Bana territory (Kolar), organised an army with the help of his associates and declared war on his uncle. According to the Peddavadagur inscription Mangalesa was defeated and killed in the ensuing battle at Elapattu Simbige. Ereya ascended the Chalukya throne as Pulakesi II and assumed the title Chalukya Parameshwara. His other assumed titles are Satyashraya, Prithvivallabha. With this conquest, Pulakesi's control extended completely over Southern India, including Maharashtra and parts of Madhya Pradesh and Gujarat. He received the title Dakshinapatheshvara (Lord of the South) at around the same time (630-634 C.E.).

The Ganga ruler Durvinita gave one of his daughters in marriage to Pulakesi, and she was the mother of Vikramaditya I.

Pulakesi was the first ruler in South India to issue gold coinage. Broad and circular in shape, the punch-marked coins had various punches at the edge, and a central punch depicting a Varaha or Boar. The Boar was the royal emblem of the Chalukyas. Contemporary literature cites the gold coins of south India as Varahas.

It is possible that Pulakesi II lost his life in one of these encounters against the Pallavas.
Pulakesi had five sons, Chandraditya, Adityavarma, Vikramaditya, Jayasimha and Ambera. They fought among themselves after his demise, trying to divide the kingdom into territories for each of themselves. Pulakesi's third son Vikramaditya I became the Chalukya king 642 and attempted to re-unite the kingdom after defeating his brothers.

*Vikramaditya I (655 – 680 C.E.)
Vikramaditya I was the third son and followed his father, Pulakesi II on to the Chalukya throne. He restored order in the fractured kingdom and made the Pallavas retreat from the capital Vatapi.

Vikramaditya, with the help of his maternal grandfather Bhuvikarma of Western Ganga Dynasty set himself the task of repelling the Pallava invasion and restoring the unity of his father's kingdom. He defeated the Pallava Narasimhavarman I to end his occupation, which had lasted for thirteen years and expelled him from Vatapi. He defeated his brothers and other feudatories who wished to divide the empire and then declared himself king of the Chalukyas (655). He rewarded his younger brother Jayasimhavarman who was loyal to him, with the viceroyalty of Lata in the southern Gujarat.

Vikramaditya continued his enimity with Narasimhavarman's son and successor Mahendravarman II, and later with his son Paramesvaravarman I. He allied himself with the Pallava's other enemy the Pandyan Arikesari Parankusa Maravarman (670 – 700).
Vikramaditya I was married to the Western Ganga princess Gangamahadevi. He died in 680.

*Vinayaditya (680 – 696 C.E.)
Vinayaditya succeeded his father, Vikramaditya I on to the Chalukya throne. His reign was marked by general peace and harmony. He earned the titles Yuddhamalla, Sahasarasika, Satyashraya.

He had fought alongside his father against the Pallavas, he defeated the Pallavas, Kalabhras, Keralas and the Kalachuri of central India. From the Kolhapur plates of 678 he defeated the kingdoms of Lanka and Kamera. The Vakkaleri plates confirm the Chalukya levying tribute on Kamera, Lanka and Parasika (Persia). During this time, Persia was under Islamic invasion.
Vinayaditya sent an expedition to the north under the command of his son Vijayaditya. According to some accounts, Vijayaditya was captured and held prisoner and after a period of incarceration, escaped and returned to the Chalukyan kingdom to be crowned the monarch of the empire.

We do not have any further information on this expedition. Vinayaditya sent an ambassador to the Chinese court in 692.

Vijayaditya succeeded his father in 696.

*Vijayaditya (696 – 733 C.E.)
Vijayaditya succeeded his father, Vikramaditya I on to the Chalukya throne. His long reign was marked by general peace and prosperity. Vijayaditya also built a number of temples. He fought against the Pallavas and extracted tributes from Parameshwar Varma V. The Alupas of South Canara who were loyal to the Chalukyas and led by Alupa Chitravahana, brother-in-law of Vijayaditya defeated a Pandyan invasion of Mangalore in 705. He was succeeded by his son Vikramaditya II in 733.

*Vikramaditya II (733 – 746 C.E.)
Vikramaditya II was the son of King Vijayaditya succeeded the Badami Chalukya throne. He had conduced successful military campaigns against their arch enemy, the Pallavas of Kanchipuram. His most important achievements were the capture of Kanchipuram on three occasions, the first time as a crown prince, the second time as an emperor and the third time under the leadership of his son and crown prince Kirtivarman II. Virupaksha Temple inscription alludes to the emperor as the conqueror of Kanchi on three occasions and reads Sri Vikramaditya-bhatarar-mume-Kanchiyan-mume parajisidor. The other notable achievement was the consecration of the famous Virupaksha Temple (Lokeshwara temple) and Mallikarjuna Temple (Trilokeshwara temple) by his queens Lokamahadevi and Trilokadevi at Pattadakal. These two monuments are the centre piece of the UNESCO World Heritage Monuments at Pattadakal.

Kirtivarman II (746 – 753 C.E.)
Kirtivarman II also known as Rahappa succeeded his father Vikramaditya II. His reign was continuously troubled by the growing power of the Rashtrakutas and finally succumbed to them.
Kirtivarman and his Ganga feudatory Sripurusha came into conflict with the Pandya ruler Maravarman Rajasimha I who was extending the Pandya Empire on to the Kongu country which was adjacent to the Ganga kingdom. Rajasimha crossed the Kaveri and engaged Kirtivarman and Sripurusha in a big battle at Venbai on the banks of the river Kaveri. The Chalukya king was defeated.
The Elichpur clan was a feudatory of the Badami Chalukyas, and during the rule of Dantidurga, it overthrew Chalukya Kirtivarman II and went on to build an empire with the Gulbarga region in modern Karnataka as its base. This clan came to be known as the Rashtrakutas of Manyakheta, rising to power in South India in 753.
http://historyofindia-madhunimkar.blogspot.com/2009/09/chalukya-dynasties.html