One peculiarity with this family is that it traced its descent from the Sun, while many other Chaiukya families considered themselvet as of lunar descent.

Tradition associates Vemulawada with poet Bhima Kavi but the famous kannada poet Pampa lived here as the court poet of Arikesari II and dedicated his famous work Bharata or Vikramarjuna Vijaya to him.

c.725 - c.750 AD : Rajaditya
All the above 3 rulers helped Vinayaditya and Vijayaditya in their wars against the palavers and the Arabs.

Yudhamalla and Rashtrakuta Dantudurga planned and carried out the overthrow of Kirtivarman II, the last Chalukya ruler of Badami in 753 AD.

Of Yudhamala I we get vert exaggerated eulogy from Kollipara plates issues by his son; he is compared to Rama in valour and described as visvarat (universal emperor); he is said to have subjugated the whole world with the aid of the boar-crest obtained by the royal family as a boon from Lord Narayan, and among the kings who bowed at his feet are counted those of Turushka, Yavana, Barbara, Kasmira, Kambhoja, Magada, Malava, Kalinga, Ganaga, Pallava, Panda, Kerala and others.

In refreshing contrast to it from later inscriptions and pampa that he ruled Sapadalaska country and his suzerainty was acknowleged by many feudatories. He made artificial tanks of brick and mortar in Podana, filled with oil for the daily bathing of 500 elephants. He captured the natutal fortress of Chitrakuta.

c.775 - c.800 AD : Arikesari I
Ruled from Vemulawada.
Captured and ruled Vengi together with Trikalinga by the strength of his arm. Pampa says that this happened in the reign of Nirupama / Dhruva.

During a civil war of Rashtrakutas, Dhruva(AD 780-93) attacked Vishnuvardhana IV (772 - 808) of Vengi to punish him for his part in aiding Govinda II (774 - 780). Arikesari aided Dhruva greatly and was duly rewarded. We may assume that parts of Telangana definitely changed hands as a result of Arikesari's campaign. It is quite probable that after this Vemulawada became seat of their power.

Pampa says that Baddega was victorious in 42 battles and earned title solada-ganda (the soldier who knew no defeat).

He constructed a temple of Baddagesvara which is identified with the Bhimeswara temple at Vemulawada.
Baddega suffered defeat at least once at the hands of Gunuga Vijayadiya (849 - 892).
Both Pamapa and the Parbhani plates say that he captured Chalukya Bhima I (892 -921)in the war that took place near the water fort of Kunala(Kolleru) in the Vengi area, who ascended the throne of Vengi after the death of his uncle Gunaga Vijayaditya III in 892. Bhima effected his escape from captivity with the aid of Kusumayudha of Mudigonda Chalukyas.

Baddega's political influences was felt as Bastar where the ancient Chatrakuta mandala was situated.

915 - 930 AD : Narasimha II
Wife : Lokambika/Jakavve (sister of Rashtrakuta Indra III)
The Vemulawada inscription attributes to him the single handed conquest of the Seven Malavas, a victory over the army of Gurjjara raja and says that he put the final seal on his frame by a victory over a group of kings on the hill of Kalapriya. Pamper furnishes the name of Gurjara king was Mahipala on whom Narasimha descended like a thunderbolt, compelling him to escape from his capital. Pampa also mentions a victory over the Latas as the first of his achievements, and adds that he had caused his horses to drink the water of the Ganges before he established his fame with his sword at Kalapriya
for his overlord Rashtrakuta Indra III (914 - 929).

930 - 955 AD : Arikesari II son of Narasimha II and Jakavve
Wife : Revakanirmadi (daughter of Rashtrakuta Indra III 914 - 929)
His reign considered as golden period for Nizamabad and Karimnagar.
Arikesari is famous as the patron of Pamapa, and for the apparently decisive he played in the political revolution in which samanthas of Govinda IV (930 - 934) dethroned him and transferred the Rashtrakuta empire to Amogavarsha III (936 - 939).

c.955 - c.960 AD : Vagaraja
Ruled from Gangadhara as Capital
Patronized Somadevasuri, the author of Yasastilaka Champu who described the king as Pada-padmopajivi a worshipper of the feet of the Rashtrakuta king Krishna III. indicating the declining power of Vemulawada Chalukyas.

Ruled from Vemulawada as Capital
The bommalagutta region flourished as a center of Jainism during his rule.
c.965 - c.973 AD : Arikesari III son of Baddega II
Ruled from Vemulawada
Vassal of Krishna III (939 - 967)and makes a grant in 966 to a Jain temple erected by his father in the capital known as Subhadama Jinalava.

The rule of this family is ended in 973 AD by Chalukyas of Kalyani Taila II. 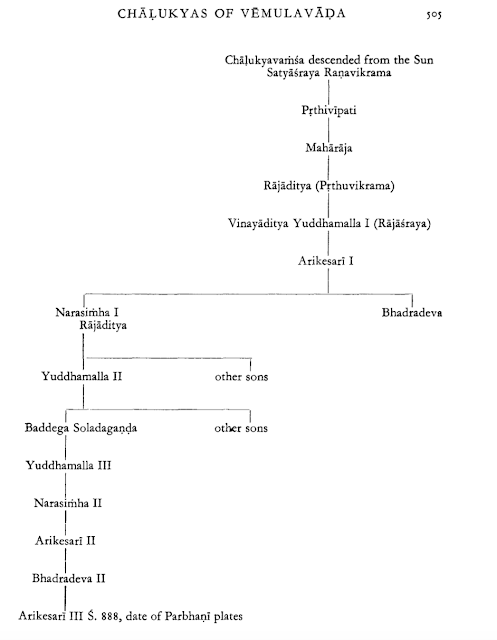