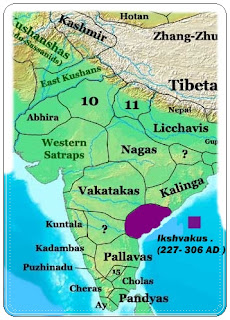 “The discovery of this inscription is important for the history of Ikshvaku dynasty, as the regnal year mentioned in this inscription extends the reigning period of the king by seven years, from 11 to 18. This inscription records the erection of a pillar containing the Dharmachakra by the chief physician (aggra-bhishaja) of the king.
Inscriptional evidence from Nagarjunakonda reveals the names of subordinates whose relation to the Iksvakus cannot be established. A memorial pillar to a Mahasenapati Mahatalavara Araka Mahakoduvaka Ayabhuti. Another inscription refers to a Talavaravara Elisri, the son of Gandi and the grandson of senapati Anikki who had a temple constructed.
The last of the Iksvaku kings was overthrown by Abhiras  and Pallava ruler Simhavarman I (A.D. 315-345) around c.320 AD.