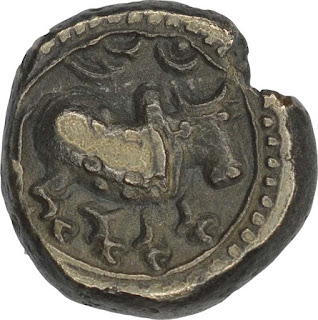 Like many other dynasties that rose to imperial power during 4th to 8th Century AD, the origins of Vishnukundina Dynasty are also shrouded with mystery.

All the inscriptions were written in sanskrit. Tummallagudem inscriptions have become the chief sources to reconstruct the dynasty.
Adminstration
Rashtras and Vishayas were the provincial divisions for administrative convenience. Each one was headed by Viceroys chosen from the Royal family. Elephants, horses, Chariots, cavalry and infantry formed the major chunk of army. The Agrahara villages (villages set aside exclusively for the development of Brahmin caste) was exempted from tax levies. However, taxes and duties were levied heavily to meet the administrative expenses by the Rulers.

Education
Telugu and Sanskrit languages flourished during this period. The Rulers themselves authored certain book while other poets also flourished. A number of Vedic schools were established to impart Vedic education. Lands were also gifted to further the educational needs.

Religion
The Rulers of Vishnukundina Dynasty were ardent followers of Lord Shiva and hence took over the responsibility of constructing a number of temples dedicated to Lord Shiva.

Undavalli caves, Caves at Vijayawada, Mogalirajapuram and Bhairavakonda are examples of cave temples constructed during the Rule of this Dynasty. Pallava Mahendra Varman-I also contributed significantly for the purpose.

419 AD - 456 AD : Govindavarman I
Tummalagudem Inscription issued by Govindavarman I in his 37th regnal year in the Telugu Month Vaisakha on Purnima (full moon) day.
He was the most famous of early rulers, married Parama Bhattarika, daughter of Mularaju who was the ruler of Gunapasapura and expanded his kingdom with the support of his father-in-law and declared independence from Vakatakas.
Indrapala copper plate charter informs us that the Vishnukundin ruler Govindavarman, son of Madhavavarman and grand son, of Indravarman gave away the village of Penkapara to the arya sangha of the four quarters at the monastery of his chief queen (agra-ma-hishi), Paramamahadevi, for the uninterrupted provision of lamps, incense, perfumes, flowers, flags, drinks and food, beds, seats, grass medicine and repair-work in his thirty seventh regnal year.
Issued First Inscription of Tummalagudem that he treated all castes and creeds in his kingdom equally and described himself as koustuba (jewel) of sriparvata region.
Govindavarma I was a follower of Budhism and also a great scholar in Buddhist texts and other sciences. Built Govinda Vihara on the banks of river Musi at Hyderabad (Chaitanyapuri).

456 AD - 504 AD : Madhavavarma II ruled at least 48 years
Ipur plates (first set) of the 37th year of Maharaja Mashavavarman who was the son of Govindavarman.
Polamuru plates of the 48th year of Maharaja Madhavavarman who was the son of Govindavarman and grandson of vikramahendra on a full moon day in the month of Phalguna when Lunar eclipse occurred.
Son of Mahadevi and Govinda Varma I.
The reign of Madhavavarma was a golden age in the history of the Vishnukundins. It was during this period, the small Vishnukundin dynasty rose to imperial heights. A princess of the then powerful ruling family of the Deccan the Vakatakas was given in marriage to Madhav Varma's son, Vikramendra Varma.

This alliance gave them great power and made it easy for them to extend their influence to the east coast and vanquishing the petty chieftains lingering on in that area. Madhav Varma II led his arms against Ananda Gotrikas who were ruling over Guntur, Tenali and Ongole, probably enjoying subordinate position under the Pallavas of Kanchipuram.

Madhav Varma II next turned his attention against the Vengi kingdom which was under the Salankayanas. The Vengi region was annexed. The Godavari tract became part of the Vishnukundin territory. After these conquests the capital might have been shifted to Bezwada (Vijayawada), a more central location than Amarapura. These extensive conquests entitle him to the title of the lord of Dakshinapatha (southern country). After these various conquests Madhav Varma performed many Asvamedha, Rajasuya and other Vedic sacrifices. The Most Notable Military Achievement of Madhava Varma II was his Victory over the Powerful Vakataka Emperor Prithvishena II

Madhava Varma has 3 sons Devavarma, Vikramendra Varma I and Manchana Bhattaraka Varma.
504 AD - 508 AD - Devavarma
Devavarma ruled for a short period of time, died fighting with Simhavarman III of Pallava Dynasty.
508 AD - 555 AD : Madhava Varma III ruled atleast 47 years
After the death of Devavarma, his son Madhava Varma III came to rule as simhva varma-III of the pallavas died. Madhavavarma defeated Anantavarma of vasishti dynasty. He ruled for atleast 47 years years and bought the fame of vishnukundin dynasty up to the peak again.

504 AD - 528 AD : Vikramendra Varman I
Worshipper of Budha and son of Vakataka Princess. As the  Pravarapura-Nandivardhana branch has no heir, Vikramendra has become the ruler of whole of Vakataka kingdom.
528 AD – 555 AD : Indra Bhattarakavarma or Indravarman II ruled at least 27 years
Ramatirtham plates of the 27th year of Rajan Indravarman son of Rajan Vikramendra and grandson of Madhavavarman. Son of Vikramendra Varma I and succeed in suppressing the dominance of Madhava Varma III. The first king to form and conduct Ghatikas (parishads) in the field of education and a devote follower of veridic religion and was called as a great Brahmin. He formed a new type of army wing with the powerful elephants defeated all the sub-ordinate rulers like pridhvimula and others who declared independence during his fathers reign with the backing of Indravarma of Ganga Dynasty. Wiped off the Mathara, vasishta, Ramakasyapa and pitrubhakta dynasties. Later he also defeated Madhava Varma III from trikuta and other regions.

But, Indra Bhattarakavarma was defeated by Ishana Varma, the Moukhari ruler. He gave his daughter to Sarva Varma, son of Ishnavarma in marriage and made a peace agreement with them.

555 AD - 569 AD : Vikramendra Varman II
Vikramendravarman II is said to have adopted a certain Madhavaraja as his son.
Queen Paramabhattaikamahadevi descended from the royal family known as Prithvimula, caused to be erected a monastery known after her own name Paramabhattaikamahavihara at Indrapura to display, as it were the wealth of Sri-Govindaraja. After defeating the Pallava king Simha, Vikramendravarman II happened to come to Sakrapura (Indrapura) . This event took place on the 8th tithi of the dark half of the month of kartika in the saka year 488 (566 A.D)
On the basis of the Indrapalanagara grant dated in the 11th regnal year corresponding to Saka 488, Vikramendra-varma II may be said to have ascended the throne in Saka 477 i.e., 555 A.D. His Tundi grant gives his latest regnal year as fourteen. So his reign period may be placed between 555 A.D.
and 569 A.D.
Chikkula plates of the 10th year of Maharaja Vikramendravarman II son of Maharaja Indrabhattarakvarman grand son of Vikramendaravraman I and great grandson of Maharaja Madhavavarman
Issued Second Tummalagudem inscription in the 11th regnal year, Telugu month Kartika, in the second fortnight. He had a title Bhuvana Raksha Bharanaikasraya and fought battles with challenge royal families and palavas.

While he was fighting a battle with the Pallavas, Pridhvi Maharaja of Ranadurjaya dynasty declare independence. So, Vikramendra invaded pisthpur (Pithapuram) and died in the battle.

569 AD - 611 AD : Madhavavarma IV
Vishnukundina Empire expanded under its able ruler Janssraya Madhav Varma IV. He consolidated his position in Vengi. An incomplete work on Sanskrit poetics called Janasraya Chando Vichiti was attributed to Madhav Varma IV, who bore the title of 'Janasraya'. Generally, Sanskrit (not Telugu) enjoyed royal patronage under the Vishnukundins. Madhav Varma IV had to face the Chalukyan assault in his last years of rule.
611 A.D : It is likely that the Chalukya Pulikesin II (610– 642 AD) defeated Madhava Varma IV as per the Kopparam plates of Pulikesin II issued on 21st October 611 AD