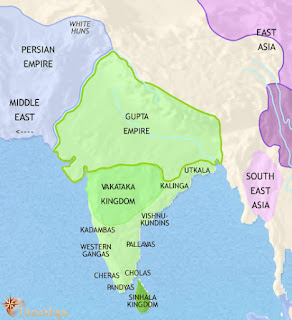 c.340 - c.500 A.D : The Vakataka Empire (c.250 - c.500 AD) was a royal Indian dynasty that originated from the Deccan in the mid-3rd century CE after Satavahanas and Telangana region after Abhiras by Sarvasena of Vastagulma or Western Vakatakas.
Founder Vatsagulma branch – This branch was founded by Sarvasena, the second son of Pravarasena I after his death. King Sarvasena made Vatsagulma, the present day Washim in Washim district of Maharashtra his capital.
Languages : Sanskrit and Prakrit
Their state is believed to have extended from the southern edges of Malwa and Gujarat in the north to the Tungabhadra River in the south as well as from the Arabian Sea in the west to the edges of Chhattisgarh in the east.
Little is known about Vindhyashakti (c. 250–270 CE), the founder of the family. Territorial expansion began in the reign of his son Pravarasena I (270 - 330).
It is generally believed that the Vakataka dynasty was divided into four branches after Pravarasena I. Two branches are known and two are unknown. The known branches are the Pravarpura-Nandivardhana branch and the Vatsagulma branch.
The territory ruled by this branch was between the Sahydri Range and the Godavari River which includes Telangana.
Cultural Contributions
Some of the kings of the Vakataka dynasty contributed heavily towards the sectors of culture, religion and arts. Though the rule of these kings was not as famous or as significant as the kings of other famous dynasties, they still played a big role in those days.

Art
During the rule of King Harishena, cave numbers sixteen and seventeen were dug out and adorned with excellent paintings and sculptures. One of the famous historians, Walter Spink has recorded that all the caves in the Ajanta rock cut temples, except caves 9, 10, 12, 13 and 15A, were constructed during the historic rule of Harishena.

Literature
One of the rulers of the Vatsagulma branch, King Sarvasena, was also a famous poet and is best known for his work, Harivijaya in Prakrit script. During the time it was written, this work was praised by lot of literature experts. However, this work got lost over time due to lack of preservation. The work termed as Gaha Sattasai, was also penned by Sarvasena.

Religion
The last significant ruler of the Vatsagulma branch, Harishena, was known to have contributed excessively towards Buddhism culture.

According to the eighth ucchvāsaḥ of the Daśakumāracarita of Daṇḍin, which was written probably around 125 years after the fall of the Vakataka dynasty, Harishena's son, though intelligent and accomplished in all arts, neglected the study of the Dandaniti (Political Science) and gave himself up to the enjoyment of pleasures and indulged in all sorts of vices. His subjects also followed him and led a vicious and dissolute life. Finding this a suitable opportunity, the ruler of the neighbouring Ashmaka sent his minister's son to the court of the Vakatakas. The latter ingratiated himself with the king and egged him on in his dissolute life. He also decimated his forces by various means.
Ultimately, when the country was thoroughly disorganised, the ruler of Ashmaka instigated the ruler of Vanavasi (in the North Kanara district) to invade the Vakataka territory. The king called all his feudatories and decided to fight his enemy on the bank of the Varada (Wardha). While fighting with the forces of the enemy, he was treacherously attacked in the rear by some of his own feudatories and killed. The Vakataka dynasty ended with his death
Few historians believes that Narendrasena's son, Prithvisena II may have played a role in the destruction of the Western branch of the family. But it is believed that soon after Prithvisena II, the Vishnukundins of Andhra Pradesh, who ruled from Guntur, took over the Eastern Vakataka kingdom. The Chalukyas of Badami may have sounded the death knell on this empire around 550 CE. Thus, the Age of the Vakatakas had truly ended by the middle of the sixth century AD. 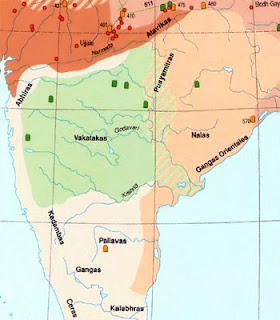 c.355 AD - c.395 AD : Vindhyasena
Vindhysena was also known as Vindhyashakti II. He is known from the well known Washim plates which recorded the grant of a village situated in the northern marga (subdivision) of Nandikata (presently Nanded) in his 37th regnal year. The genealogical portion of the grant is written in Sanskrit and the formal portion in Prakrit. This is the first known land grant by any Vakataka ruler. He also took the title of Dharmamaharaja.
The marriage of Prabhavatigupta with Rudrasena II of Nandivardhana-Pravarapura Branch was an important diplomatic alliance. Prabhavatigupta was the daughter of Chandragupta II and Kuberngaga of Naga dynasty.
c.395 AD - c.440 AD : Pravarsena II
Pravarasena II was the next ruler of whom very little is known except from the Cave XVI inscription of Ajanta, which says that he became exalted by his excellent, powerful and liberal rule. He died after a very short rule and succeeded by his minor son, who was only 8 years old when his father died.
422 A.D : Jamb Plates
439 A.D: Ridhapur plates
440 A.D: Miregaon plates
Most of the grants by Pravarasena II mentions pravarpura as the place of issue.
The Riddhapur grant of Prabhavitigupta was given from the footprint of the lord of Ramgiri.
Although Prabhavatigupta rules as a regent, she does not use high sounding titles.
c.440 AD - c.445 AD : Sarvasena II
He was succeeded by his son Devasena.
c.445 AD - c.460 AD : Devasena
His administration was actually run by his minister Hastibhoja. During his reign, one of his servant Svaminadeva excavated a tank named Sudarshana near Washim.
Hisse-Borla inscriptions of Devasena was the only inscription in Saka era with reference to planetary position of great bear (saptrsi) in Uttara Naksatra.
Devasena established relations with the rising power of the Vishnukundins, giving his daughter in marriage to the Vishnukundin king Madhavavarman II Janashraya.
He was succeeded by his son Harishena.
c.460 AD - 477 AD : Harishena
As per Ajanta Cave 1 inscriptions Harisena ruled from c.460 AD - 477 AD
Harisena was agreat patron of Buddhist architecture, art and culture. The World Heritage monument Ajanta is surviving example of his works. The rock cut architectural cell XVI inscription of Ajanta states that he conquered Avanti (Malwa) in the north, Kosala (Chhattisgarh), Kalinga and Andhra in the east, Lata (Central and Southern Gujarat) Harishena was succeeded by two rulers.
The Chaitya complex involving Cave 26 and its four wings was sponsored by a monk named Buddhabhadra, who had intimate links to the court of the powerful neighboring province, Asmaka.
Harisena dies suddenly (perhaps murdered by the Ashmakas) in 477, when his Cave 1 has not yet been dedicated. In 479 A.D the inept Sarvasena III succeeds his father Harisena, while the site’s anxious patrons rush their shrine Buddhas to completion and dedication.
Vishnukundins took over main branch of Vakataka Dynasty by  Madhavavarma II (456 AD - 503 AD)