Polavasa / Polasa chiefs / Nengonda Dynasty (1075 AD -1160 AD) are the descendants of Rashtrakutas and were based immediately north of the Kakatiya territories. Polavasa was a capital under the rule of Medaraja (1080–1110).They ruled from their capital at Polavasa (modern day Jagtial) of Karimnagar district to Narsampet of Warangal district from their capital at Polavasa.
Polavasa kings would have maintained the confederation, as three brothers Medararaju,Edaraju and Gundaraja (1116- 1138) was ruling from different places and bearing the same title. This may be because of their Rastrakuta descent.
The Polavasa chiefs were subordinates of the Western Chalukyas, but revolted against their overlords during the early 12th century. However, they were eventually subdued by Chalukya King Jagadekamalla II, with the support of Beta II (1076 - 1108) for which he was awarded Sabbi-1000 region (modern-day Karimnagar district).

Prola defeated Gundaraja, ruler of Mantrakuta (modern Manthani), pursued him to his capital where he had his head shaved and caused him to be branded on the breast.

Pratapa Rudra-II of Kakatiya dynasty conquers the Polavasa and neighbouring regions. The ruler of Polavasa Medaraju II, who gives his only daughter in marriage to the tribal king Pagididdaraju of Medaram flees to Medaram after losing his kingdom to Kakatiyas.

All of them were defeated by Kakti Prola II between A.D. 1138 and 1140. Consequently the eastern portions of the district including the areas of Manthani, Ramagundam and present Godavarikani were included in the Kakatiya kingdom. The temples built during 11th and 12th centuries by the Polavasa chiefs, Chalukyas of Kalyani and Kakatiyas are noticed in this region. Among them the Trikuta temple of Jangoan, which now forms a part of Godavarikhani, is a wonderful monument which is partly in ruins. 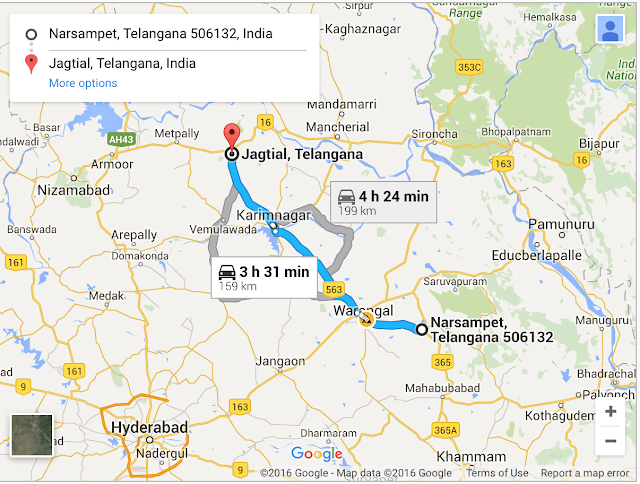