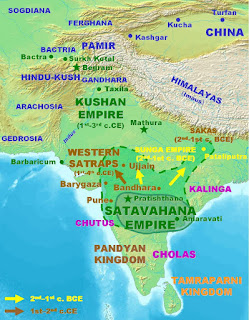 Satavahana Dynasty and Pre-Satavahana Rulers (circa 232 BC - 220 AD).
Excavations in kotilingala found punch marked coins of Pre Satavahana rulers Gobhada, Siri Kamvaya, Vayasiri and Samagopa
As a coin with the name ‘Simukha’ was found along with the coins of gobhadra and Samagopa, it is concluded that Simukha conquered their kingdom. That is why the upper layers at Kotilingala revealed the coins of Satavahanas.
Satavahanas were also called Salivahanas and Satakarnis. The coins issued by the Satavahana kings Simuka, Siri Satavahana, Satakani I, Satasiri, Satakani II, Vasittiputta Pulumayi, Vasittiputta Satakani and their governors were discovered in Kotilingala. These discoveries testify the fact that Telangana was the nucleus of Satavahana Empire.
Though Satavahanas conquered the above kingdom, they left the kingdom of Maharathi dynasty at Nalgonda and Mahabubnagar districts region alone.
Maharathi Dynasty
Ruled regions of Khammam, Nalgonda and Mahabunagar
Declared independence after fall of Mauryan empire.
When studies were conducted on the rulers of Nelakondapally, Khammam district, and some regions of Karnataka, the name of a dynasty called ‘Maharathi’ was revealed. Ashoka’s stone inscriptions called them as ‘Rathikas’. Historians opined that they were kings of subordinate kingdoms at different regions during the Mauryan rule. They declared independence after the fall of Mauryan empire in Telangana and Karnataka regions. They ruled some regions of Telangana and Karnataka until 100-150 A.D.
It is said that Simukha married a woman of Maharathi dynasty; and also his daughter-in-law was a Maharathi princess. That might be the reason for him to not to conquer their kingdom.
Prakrit was the official language of communication used by the Satavahana Kings

Literature like Gathasaptashati, painting like Ajanta flourished during the Satavahana rule.
The Satavahanas patronized Hinduism. They formed a cultural link and played a very important part in trade and the transfer of ideas and culture.

To establish their rule, they had to compete with the Sungas and after that the Kanvas of Magadha. Later, protected a huge part of India against foreign attackers like the Pahlavas, Yavanas and Sakas. The rulers of the Satavahana Dynasty, Sri Yajna Satakarni and Gautamiputra Satakarni defeated the overseas invaders such as the Western Kshatrapas and stopped their expansion. The Empire was split into smaller states in the 3rd century CE.

The Satavahanas ruled a powerful and large empire which withstood the attacks from Central Asia. Apart from their military power, their naval activity and commercialism helped them to establish Indian colonies in Southeast Asia.

Simuka
Simuka appears to have been a very shrewd politician. He realised that to overthrow the Kanvas was a difficult task and hence entered into an alliance with maharathi Tranakayira whose daughter was married to his son Satakarni. Tranakayira was a Naga, possibly, a vassal under the last Kanva ruler. The several servants combined together to overthrow the Kanva regime and the powerful among them ultimately won the crown. He is named as Balipuccha in some texts

Satakarni I son of Simuka

Hala
Hala is mentioned by Vatsyayana in his Kamasutra and Rajasekhara in his Kavya Mimamsa. Hala patronises literature and the arts, and the Prakrit work, Saptasati, is ascribed to him. Gunadhya, the author of Brihat Katha, is his contemporary. As he is a patron of poets, he is known by the title 'Kavivatsala'. He marries a Ceylonese princess on the banks of the River Sapta-Godavari-Bhima.

Vashishtiputra Satakarni, Gautamiputra's brother, married the daughter of Rudradaman I of the Western Satraps dynasty. Around 150 CE, Rudradaman I, waged war against the Satavahanas.

As a consequence of his victories, Rudradaman recaptured all the former territories previously controlled by Nahapana. Satavahanas were restricted to their original base in the Deccan and around Amaravati.

Yajna Sri Satakarni, the last great king of this dynasty, recaptured their southern regions in western and central India. The Satavahanas regained some prosperity during the reign of Sri Yajna Satakarni but around the middle of the 3rd century, the dynasty ended.

Four or five kings succeeded Yajna Satakarni. However, due to a decline in central power, dynasty’s feudatories rose and soon the dynasty ended.


Some Early Dynasties of South India