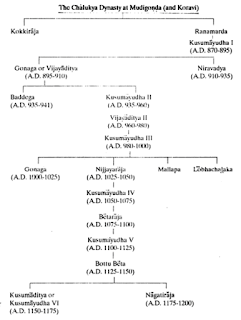 The Mudigonda Chalukyas were based east of the Kakatiya territories. They hailed from the village of Mudigonda (located near modern Khammam), and ruled most of modern-day Khammam district and east area of Warangal between the 8th and 12th centuries. They were originally subordinates of the Chalukyas of Vengi, but later passed under the suzerainty of the Western Chalukyas of Kalyani. From c.1000 onwards, Bottu Beta and his successors ruled as subordinates of the Kakatiyas.

Their kingdom bordered the kingdoms of Vengi and Malkhed.
Gonagudu I
Kokkiraja, Son
Ruled from Capital Mudigonda.
Kokkiraja was a valorous king who ruled the kingdom with the help of his brother Ranamarda.

c.850 AD - 870 AD : Ranamarda, Brother
He must have served the Eastern Chalukyas first and was given Koravi region by them to rule, with Mudigonda as Capital.
According to Mogilicharla inscription he developed Manchikonda, Kondapalli as cities and reportedly wore a necklace called 'Ranamarda Kantiya' to denote his victories.

870 AD - 895 AD : Kusumayudha I
Kusumayudha I aided the escape of Vengi Chalukya Bhima I (892 - 921) from Rashtrakuta Vassal Vemulawada Chalukya Baddega I (c.850-895) who showed dauntless courage and remarkable bravery in restoring the Vengi kingdom to Chalukya Bhima I.

c.1150 AD - 1175 AD : Kusumayudha VI
Kaktiya Rudra in his last days deputed his general Recherla Rudra to subdue the Bottu chief of Koravi. Kusumayudha VI along with his ministers Karunadhi pati, Indaparaju and Devaraju was forced to retreat to the forest and lived underground for 12 years and later recaptured the kingdom.

1175 AD - 1200 AD : Nagatiraja
Nagatiraja was the last prominent ruler in this dynasty.
Katakana Mahadeva died in 1198 AD and his son Ganapatidev captured, Nagatiraja attached Kaktia kingdom. Recherla Rudra came to the rescue and chased away Nagatiraja. After the release of Kakatiya Ganapatideva, he annexed the Mudigonda region to the Kaktiya empire. Thus ended the rule of Mudigonda Chalukya dynasty in c.1200 AD.

1218 AD : According to the Srikakulam inscription, Nagatiraja who lost his kingdom lived in Konalu region.