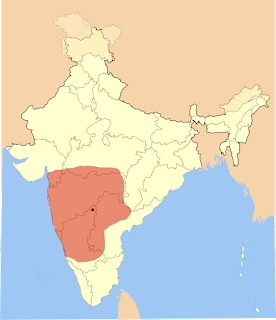 The last ruler of Rastrakuta Dynasty Kakka II (Karaka) was killed by Taila II or Tailapa II the scion of old Chalukya stock in 973 AD. Thus Taila II founded the dynasty of Chalukyas of Kalyani which lasted for 2 centuries. For 200 years they remained in conflict with the Cholas and also the eastern Chalukyas of Vengi. They were finally destroyed by the Hoyasala Empire in 12th century. The empire of Chalukyas of Kalyani is also known as Western Chalukya Empire. This empire has a great contribution in the modern Kannada literature as well as Sanskrit literature.
973 - 997 AD : Tailapa II
Tailapa-II was one of the feudatories of the Rastrakutas and declared independence from Rashtrakutas after killing Karka and occupied his capital Manyakheta.
He restored the family of his ancestors to its former glory. Taila reigned for 24 years and during that time was able to recover the ancient territory of his race except the Gujarat region. We know about his reign from the Gadag records. He patronized a Kannada poet Ranna who was one the earliest poets of Kannada language. Ranna, Adikavi Pampa and Sri Ponna together are called three gems of Kannada literature.
Supported Mudigonda Chalukyas against Kaktiyas by killing Gunda IV (950 - 995).

According to the Guider epigraph Kaktiya Beta I (996 - 1052) was too young to rule when his father was killed. The Kakatiya family was in dire straits at this time, being deprived of their lands as well as an adult male head. On the request of Kamavasani, the wife of Viriyala Erra Tailapa made him the head of Koravi region.
Most of the time, Tailapa II kept on fighting with Munja, a Paramara king of Dhara. Munja was finally captured and probably killed in captivity. This was in 995 AD. Two years later Tailpa died and his crown was passed on to his son Satyasraya
997 - 1008 AD : Satyasraya
The period of reign of Satyasraya was 997 to 1008 AD. Though, to star with, he adopted the aggressive policy of his father had enmity with the eastern Chalukyas and Cholas. His 11 years reign was disturbed and was finally faced the disastrous consequence of a war with the great Chola Rajaraja-I. Rajaraja-I overran the Chalukya country and looted and killed a large number of men, women and children. Satyasraya was followed by Vikramaditya V and Jaysimha II. The next important king was Someshwara I.
The whole of Telangana region was under his rule.

Developed the town of Kolanupaka and gave donations to Jain.

1042 - 1068 AD : Someswara I
Someshwara I, who was also known as Ahavamalla or Trilokamalla reigned from 1042 AD to 1068 AD. The contemporary Chola King was Rajadhiraja Chola I who became Chola king in the same year i.e. 1042. Someshwara I had established Kalyani as its capital.

He faced the attack of Rajadhiraja Chola-I, who overran initially the Chalukyan capital and demolished the forts and erected the pillars as a memorabilia of the victories, but the Chalukyan counter attack forced them out. Under Someshwara-I , the Chalukya army raided Chola capital Kanchipuram but it was repelled back. Finally in the battle of Koppam, Rajadhiraja Chola was killed. But his younger brother took the command and drove the Chalukyas back. In this attack, brother of Someshwara-I was killed. The reign of Someshwara I is known for numerous wars.

Kaktiya Beta I (996 - 1052)  joins the Western Chalukya armies of Someswara I in the Chola invasion of 1052. Along with his general, Recharla Bramha, he destroys the Chola armies (of King Rajadhiraja I) and enters the city of Kanchi.

In 1067 prince Vikramaditya VI invaded chola kingdom and plundered Tanjore, Kanchi and Gangaikonda. Kakatiya Prola I(1052 - 1076) also participated in these wars and won the praise of Somesvara and was gifted Hanumakonda region.
Inscription dated Saka 978 (1056 AD) refers to the renovation of Indra Narayana Temple, formally built by Indra Vallabha / Indra III (914 AD - 929 AD) of Rashtrakuta family, consecration of the image of Vishnu therein, erection of Garuda-pillar.
This able king of the Western Chalukya Empire ended his life by drowning himself in the river Tungabhadra, due to his inability to endure a fever. Someshwara I was succeeded by his elder son Someshwara II.

1068 - 1076 AD : Someswara II
Had a title named Bhuvanaika Malla and he was a worshipper of Shiva.
He also fought wars against Chola Dynasty.
Vikramaditya VI with the help of Chola Veera Rajendra occupied Rattapadi region and declared himself king. Later in 1071 AD attacked his brothers kingdom and defeated him and agreed to give his brother regions of Anantapur, Chitradurgam, Dharwad and Kalinga.
Vikramaditya VI not satisfied revolted second time and defeated him in 1076 AD and declared himself the emperor.

1076 - 1126 AD : Vikramaditya VI
Vikramaditya VI ascended the throne in 1076 AD which marks the beginning of Chalukya-Vikram era. Vikramaditya VI was one of the ablest kings of the Western Chalukyan Empire. He left the maximum number of inscriptions, all in Kannada.

Greatest of Kalyani Chalukya rulers. He ruled for 50 years and expanded his kingdom in a huge way. Started Chalukya Vikram era.

Vikramadiyas younger brother Jayasimha revolted against him in 1080 AD but was suppressed by him.

He invaded Chola kingdom in 1084 AD and plundered Kanchi.
Vent kingdom was port of Kalyani Chalukyas between 1118 and 1138 AD.
He is the hero of a historical poem (Vikramankadevacharita) by Bilhana, a Kashmir poet and reigned for around half a century in tolerable peace.
Vikramaditya VI captured Kanchi in late in his career and engaged with serious battles with a Hoyasala King of Dorsamudra known as Vishnu. In the capital Kalyani during the times of Vikramaditya VI, a celebrated jurist of the 12th century called Vijñāneśvara lived. Vijñāneśvara has written a treatise on inheritance which is among the most influential legal treatises in Hindu Law outside Bengal. The title of this work was Mitāksarā.
Mitākṣarā is considered to be an important commentary on Yajnavalkya Smriti. Another work by Vijñāneśvara is Dayabhaga, which is also related to Hindu law. Death of Vikramaditya VI was followed by a decline of Chalukya Empire. The Western Chalukya Dynasty ended in 1190, when most parts of its territory were absorbed by Yadavas of Devagiri and Hoyasals of Dorsamudra. The last King of Western Chalukyan Empire was Someshwara IV. After his death, the remaining territories of the
1126 - 1138 AD : Someswara III
Lost the dominance in Telangana region.