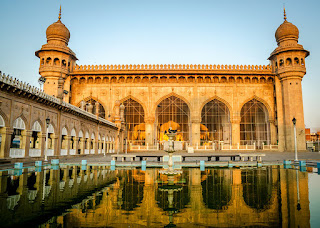 The historic Mecca Masjid is located adjacent to Charminar in a south-west direction in Hyderabad, Telangana State, India.

The construction of this mosque started in the year 1614 by Sultan Muhammad Qutb Shah and was completed in 1693. Built with local granite, it finds place among largest mosques in India and is the most important and largest one in the city. The arched gallery displays the tombs of all the Nizam’s from the year 1803.

Large enough to accommodate 10,000 worshipers, this beautiful mosque's 15 enormous arches and pillars were each wrought from single slabs of black granite dragged to the site by huge cattle trains reputedly consisting of up to 1,400 bulls. Taking its name from the bricks above the central gate that were brought here from Mecca, this impressive complex features highlights such as its main gateway, huge plaza, a large manmade pond, and a room that houses the hair of Prophet Mohammed.

Other notable features include inscriptions from the Quran above many of the arches and doors, the exquisite roof of the main hall, the cornices around the entire mosque structure, and the floral motifs and friezes over the arches.

The mosque has a length of 225 feet and is 180 feet wide with a height of 75 feet. The name is derived from the Grand Mosque in Mecca on which it is modeled. The hall has a dimension of 67 metres x 54 metres x 23 metres. The roof is rested on 15 arches.

There is a high blocking wall on the western side for Mehrab. It has two huge octagonal columns, which are created from a single piece of granite. This is inturn topped by an arched gallery crowned by a dome. This mosque can accommodate 10,000 worshipers at any time.

It is located two hundred yards from Charminar. The mosque was believed to have used bricks during its construction where brought from Mecca. A room in the courtyard is believed to house a sacred relic of the prophet.

According to history, Sultan Muhammad Qutub Shah invited the entire devout religious elders in the city to lay the foundation stone but as no one had come forward, Sultan Muhammad himself volunteered to lay foundation and it is said that he never missed his midnight prayer in life right from the age of 12.

Visitors coming to Charminar also visit the holy mosque, which lends a divine aura to the Muslim worshippers in the old city of Hyderabad.

Mecca Masjid lies in disrepair as chunk of plaster peels away

It is imposing. It is historic. And it is decaying. Mecca Masjid, one of the oldest mosque, indicating that the government has the preservation of heritage structures at the bottom of its agenda, a chunk of plaster at the historic Mecca Masjid complex peeled away on account of continued negligence.

Masjid officials who did not wish to be identified said that the canopy has been in bad shape for many years. The canopy, they added, is in need of immediate repairs