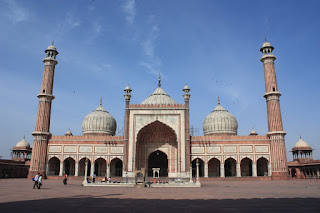 Jama Masjid is the oldest and the most famous mosque in Hyderabad, Telangana State, India.

Some of the few cities which have still kept its cultural heritage well preserved is Hyderabad. A visit to this old city summons nostalgia among the old residents of the city.

The buildings, monuments, the mosques and the temples all speak of the rich history that led to their existence. One of the biggest and the oldest Masjids in Hyderabad, the Jama Masjid is the ideal place to go, to explore Islam.

It rises with its majestic white towers just a few meters above the Charminar. Jama Masjid is one of the most popular mosques in Hyderabad and is visited by a large number of Muslims every year.

It is indeed one of the most attractive examples of Muslim architecture. The Jama Masjid is located only a few kilometers away from the Charminar in Hyderabad.

The fifth king of Qutub Shahi Muhammad Quli Qutub Shah built the Jama Masjid in the year 1597 AD after completing the Charminar. It is the oldest Mosque in Hyderabad and also have the ruins of a Turkish bath in its premises.

This Masjid was also famous for its Islamic education and a monastery in olden times Hyderabad. Now this school does not exist anymore in its premises. Muslims, in very large numbers, visit this mosque for worship and treat it in high esteem.
History

Qutub Shahi king Muhammad Quli Qutub Shah, after founding the city of Hyderabad, started building a grand mosque in the vicinity of Charminar and completed it in the year 1597 AD with majestic Turkish bath arrangements, Monastery and a school to impart the Islamic education. Now they do not anymore exist there. The ruins of old Turkish bath still lie in its premises.
Architecture

Jama Masjid is a majestic form of Islamic architecture. The beautiful white towers of the mosque can be seen from far away. It is a beautiful blend of Persian and Arabic architecture.
How to Reach

Hyderabad is a capital city of Telangana and has got its own airport so it is well connected to all major cities of India and world by air.

Being a railhead of “Deccan”, Hyderabad is also well connected city from outside and within the state of Andhra Pradesh.
By Road

Hyderabad has got good road infrastructures through which it is well connected with all places of nearby states. Local buses, Taxis, Auto rickshaws, rickshaws etc. are available for city transportation.
Nearby Attractions

This magnificent structure was built by king Qutub Shah in 1591 AD. Charminar is a land mark and a recognized global icon of Hyderabad city. It is situated on the eastern bank of Musi River.

Mecca Masjid is patterned on the grand Mosque at Mecca Sharif. Nearly 10,000 worshipers can be accommodated in this Mosque at one time. It is among the largest Mosques of India and major in Hyderabad. This Mosque is located near to Charminar in the heart of Hyderabad city.

The inserted bricks in the central arch of Masjid had been made and baked out of the clay of Mecca Sharif. The clay was brought specially for this purpose from Mecca Sharif. Thus it was named as Mecca Masjid.
Golconda Fort

The Golconda Fort is a massive fort which was initially built by the Kakatias in twelfth centaury. The Qutub Shahi kings renovated and further made it massive with granite walls and parapet that is about 5 km in circumference .The border of this large fort is round about 11 km with strong walls of 15 to 18 ft. in height. The presence of 70 ramparts and 8 big gates reflect its massiveness.
Accommodation

Hyderabad is a city which caters to the needs of each pocket. There are number of small hotels, lodges, star hotels and other charitable lodges with basic as well as finest quality of rooms, services etc. One can also avail inexpensive accommodation with basic amenities at different places in old Hyderabad city.