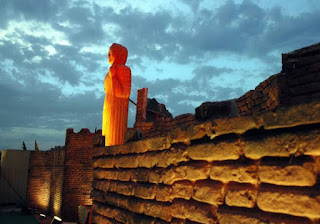 Buddhism is a religion and dharma that encompasses a variety of traditions, beliefs and spiritual practices largely based on teachings attributed to the Buddha.

Buddhism originated in India sometime between the 6th and 4th centuries BCE, from where it spread through much of Asia, whereafter it declined in India during the middle ages.

Two major extant branches of Buddhism are generally recognized by scholars: Theravada (Pali: "The School of the Elders") and Mahayana (Sanskrit: "The Great Vehicle").


Buddhism is the world's fourth-largest religion, with over 500 million followers or 7% of the global population, known as Buddhists.

Telangana could emerge as the new address for Buddhism in the country if nearly 25 unexplored Mahastupas, Viharas and Chaityas spread across the State are brought to light. These explored and unexplored sites give a deep understanding about Buddhist activity during ancient times. The excavated sites revealed rich stories from the past which indicated the prevalence of trade relations, lifestyle and excellent craftsmanship.

Budhism, started from a village Badankuri in Nirmal District between 2 Godavari rivulets in 5th Century BC. Gradually as Lord Budha propagated its teachings it spread to Kotilingala in Jagityal district, Dhulikatta in Peddapalli district, Phanigiri in Suryapet district, Nelakondapalli in Khammam district, Karukonda in Bhadradri Kothagudem district, Nagarjunakonda  in Nalgonda district and then to Andhra and Maharashtra.

According to tourism officials, these Buddhist sites have a great potential to be developed into tourist spots. The department is also trying to bring in more of Buddhist tourists, so that the sites get the required attention on the global platform. There are plans to initiate a Buddhist circuit so that the tourists could visit this place at a stretch. Former, ASI, deputy superintending archaeologist, K Venkateswara Rao said, “There are many unexplored Buddhist sites in Telangana, as Buddhism was widely spread till 5th century AD.

In Telangana there are mostly Sariraka stupas and Viharas, which are square shaped rooms where the monks used to stay.

In the ancient days, Karimnagar, Nizamabad were known Asmaka Desam where Buddhism prevailed, so there are high chances of finding more Buddhist sites in these regions during the future excavations.” Sharing his views, State Archaeology official, who preferred anonymity, said, “Telangana has always been a place for Buddhists and there have been many traces of Buddhist sites in the State which date back to 1st and 2nd centuries.

Driven by conviction, scores in Telangana have started walking along the eight-fold path or Ashtanga Marg to pursue the Buddhist way of life.

The path which stresses on pursuit of the right view, intension, speech, conduct, livelihood, effort, mindfulness and concentration, has found a record number of 750 followers distributed across the 20 Buddha Viharas in Hyderabad, only the previous year.

And 300 of those who adopted the religion did so at a Buddha Sammelan, a massive gathering organised by the Buddhist society of India held at Nagarjunasagar of Nalgonda district in 2014.

Increasing enrolment in Ambedkarite organisations that follow Buddhism as a world view has directly contributed to improvement in the number of Buddhists. A sizeable population of those adopting Buddhism in Telangana are Ambedkarites who follow the ideology, life and teaching of Dr. B. R. Ambedkar. “Following Dr. Ambedkar’s teaching I set aside 25 per cent of my monthly salary to aid the propagation of Buddhism and also education among Dalits in the community,” said M.B. Sudhakar, a Buddhist and deputy engineer at South Central Railway who started following Buddhism as early as in 1997.