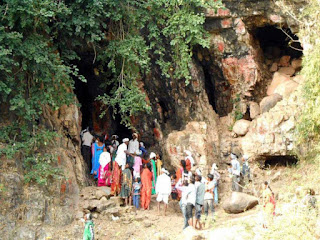 droves. The large and scenic reservoir of the Kumram Bheem project also offers a perfect getaway for the visitors.

Komaram Bheem Asifabad is set to unravel the mystique of tribal culture and their ethnicity as the religious season for Adivasis has just begun. It is time for the different sects and sub sects of the aboriginal population in this district to worship respective clan deities and other gods and large groups can be seen journeying in bullock carts and on foot to temples located inside the forests and over the hills.

For those who consider the culture of the aboriginal people as something of a mystery, the three equally mysterious cave temples of Adilabad have much to offer by way of revelations. Visitors can actually see and feel that the religious practices of the Adivasis which seem to be superstitious on the surface are actually connected with understanding nature itself.

Jangubai temple located in the hilly wilderness of Shankarloddi in Kerameri mandal.

The Jangubai temple is by far the most famous among the Adivasis, the Gonds and Pardhans, who visit it as part of a pilgrimage in the Pushya masam coinciding with December-January.

The devout among Gonds observe Jangubai deeksha in the Pushya month and visit the cave temple in large number towards the end of the deeksha. A host of ethnic religious rituals and rites can be seen at the scenic location, which also boasts of a water body at the foot of the hillock.

At the Bhuyari Pochamma temple, the Kolams take part in rituals associated with thanksgiving to the gods. Though many of the Adivasis visit the temple every Sunday, the deity is especially worshipped at the beginning of monsoon and on Dasara.

The large and scenic reservoir of the Kumram Bheem project also offers a perfect getaway for the visitors. The friendly fishermen will offer a ride in the cool water of the reservoir on their surprisingly stable rafts made of thermocol or even a piece of their roasted fish.

Reaching the Siddheshwara temple also involves braving the difficulties posed by difficult and roadless terrain as the other two.