December 17, 2016
The Sri Komaram Bheem Project is a Medium Reservoir has been built across Peddavagu River, a 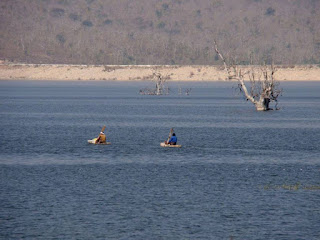 tributary of the Pranahita River. It is located at Ada village, Asifabad Mandal, Adilabad District, Telangana.

The project named after Komaram Bheem (22 October 1901 – 19 October 1940), was a tribal leader who fought against the Asaf Jahi Dynasty for the liberation of Hyderabad State. Komaram Bheem openly fought against the ruling Nizam government in a guerrilla campaign. He defied courts, laws, and any other form of Nizam authority, living off the sustenance of the forest. He took up arms against Nizam Nawab's soldiers, and fought Babi Jhari until his last breath.

Eco-tourism can be promoted in the pristine natural forests, hillocks, valleys of Kumram Bheem district

All the pain of an arduous 50 km bumpy ride on the Utnoor-Asifabad road vanishes at the sight of the blue waters of the Kumram Bheem Reservoir, located some seven km from Asifabad town in Kumram Bheem district. Most travellers stop by to take in the beauty of the lake and the hillocks beyond to help them overcome the fatigue of the journey.

However, no one stays there for more than a few minutes for the simple reason that there is no place to relax on the shores of the picturesque reservoir. At best, the visitors can approach the water near Ada village where the fishers have made a clearing.

Replicating the Kadem Reservoir model, where the Telangana Tourism department has cottages and operates boats, may not require heavy investment. There is high potential for developing tourism in the newly-carved out Kumram Bheem district, as a large area between Asifabad and Jainoor encompasses numerous hillocks, hill streams and valleys.

The tourism potential and development came up for mention at the recent public meeting held at Jodeghat in Kerameri mandal in connection with the 76th anniversary of martyrdom of Gond leader Kumram Bheem.

“The Jodeghat valley, is best suited for trekking as the hillocks here are not very high and the forests are thick. Kerala State’s Munnar model of adventure tourism can be implemented here as it will involve local communities too,” he suggested.

“The forest terrain in erstwhile Adilabad district is unique in Telangana State. Trekkers, being a disciplined lot will ensure the nature remains pristine, ,” he added.