May 26, 2014
The Gonas or Konas (1190 AD - 1294 AD), of Haihaya descent, are the feudatories of Kakatiyas and ruled over tracts around Raichur with Vardhamanapuram (Mahabubnagar) as capital.
The main centres of this Kingdom are Vardhamanpuram and Budapuram (Bhoothpur).
Claiming descent from Kartaviryarjuna and also lorship over Mahishmati.
Gona Kata Bhupati
Gona Kata, a minister of Kakatiya Ganapati, was a warrior whose feet are said to have been worshipped by his foes.
Rudra Narendra 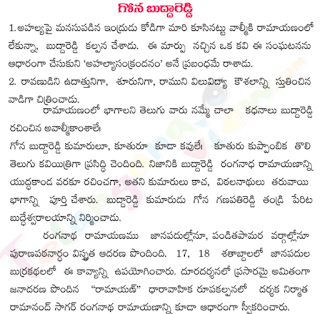 Kakatiya king Pratapa Rudra of Warrangal gave land grants to clear forests. The Gona family, headed by Immadi Reddy, was responsible for the eastern section of the doab where Gadwal became established.

1294 AD : Gona Vithala
The Kakatlya feudatory ruling at Vardhamanapura in the Mahbubnagar district.

Gona Ganna's chief minister was Vithala, his own brother. Vithala is described as the rajyarakshamani, the jewel amulet of his kingdom, protector of people, aware of his duties, possessor of good qualities and the ruler of the kingdom of Raichur.The third Kakatiya offensive was directed against the Seuna Yadavas, who were also allies of Ambadeva. The main participant in this offensive seems to have been Gona Vithala, a Kakatiya subordinate who was ruling at Vardhamanapur in southwest Telangana. Gona Vithala captured the forts of Adavani and Tumbalam in the modern-day Bellary district, as well as Manuva and Hanuva in the Raichur doab. He then proceeded to capture the town of Raichur itself, where a fort was erected. Thus, the Seuna Yadavas had lost control over their southernmost territories in the Krishna-Tungabhadra basin. The Kakatiya invasion of this region seems to have occurred around 1294, the date of Gona Vithala's inscription describing his military achievements.