Dinosaurs are known to have lived between 230 and 65 million years ago, a periodthat is known as the Mesozoic Era. The period is many million years before the first modern humans, Homo sapiens, appeared.  Scientists divide the Mesozoic Era into three periods: the Triassic, Jurassic and Cretaceous.


The 16-foot-high ‘Kotasaurus Yamanpalliensis', was found during an excavation by the Geological Survey of India (GSI) in Yamanapalli region of Adilabad district.

A GSI team unearthed the skeletons of gigantic reptiles, which lived on earth approximately 165 million years ago in the Lower Jurassic period.The GSI and Birla Science Centre worked together and mounted at Birla Museum in 2000. 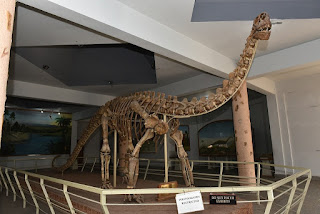 The GSI, which excavated the region for more than two-and-a-half decades, had collected nearly 840 skeletal remains belonging to various Sauropod dinosaurs.
All the 840 skeletal parts belonged to 12 individual dinosaurs from a single species, ‘Sauropod dinosaurs’, which ruled the earth for more than 130 million years after originating some 200 million years ago.
The gigantic skeleton put up at the Birla Science Centre is made up of 80 per cent original dinosaur bone material and 20 per cent artificial material.
“During the excavation process, the team found only 80 per cent original bones. The skull was gifted by the Carnegie Museum of Natural History, Pittsburg in US,” he said, adding that
it took nearly seven years for treating the fossils.
The dinosaurium in the Science Centre also displays a fossil tree trunk from Adilabad belonging to the Lower Jurassic Age, a fossilised sea snail, excavated from Trichy in Tamil Nadu, the thigh bone and leg bones of a Sauropod dinosaur, fish fossils from Adilabad and dinosaur eggs excavated in Ahmedabad 70 million years ago.
While a fossil eco-park is being developed with fossils of trees, fish, leaves and animals from the Permian, Triassic and Jurassic ages in Sironcha, Maharashtra, Telangana state forest department has neglected the Kataram-Mahadevpur-Yamanapalli site in Adilabad district despite a number of fossils found in the Pranahita-Godavari valley of the same area.
Despite the Pranahita Godavari Valley having a huge potential, no further excavation work has been taken up in the past three to four years in Adilabad.


A composite skeleton of a dinosaur – Kotasaurus yamanpalliensis Yadagiri (named after Yamanapalli village and scientist Yadagiri) – was installed at the Birla Science Centre, Hyderabad. An articulated skeleton of a Rhynchosaur with the skull and other bone elements that was discovered in the Triassic rocks of the P-G Valley was also put up at the museum.

According to scientists, apart from dinosaurs, fossils of other reptiles, fish and micromammals were available at the site. “Plant fossils and charaphytes are also known to be found from the Kota Formation. Fieldwork was carried out in Jakkepalli, Lingala and Metpalli areas of Adilabad,” said a scientist.

The fossil of a dinosaur – Barapasaurus tagorii – has been discovered by scientists of ISI, Kolkata, from the site near Sironcha on the eastern side of the Pranahita.

Mr Mathen ‘Rajeev’ Mathew, member of the National Biodiversity Authority and the Telangana State Biodiversity Board, said after a visit to the Wadadham Palem area in Sironcha: “The timeline of the area is 200 million years, preserved in the Gondwana, which was one of the two super continents predating Pangaea. Fossils of trees have been found here along with those of dinosaur eggs.”

He said the fossils were exposed due to floods in the recent past. The tree fossils were of coniferous species going by the outer layer of the bark. “The tree fossils are darkening/blackening, possibly due to some fungal or biotic attack or exposure to the elements. The dinosaurs eggs were found in the area and partially buried in loose sand and mud, suggesting that they were washed up,” he said.

He added, “The flooding that exposed the fossils is the likely reason why the dinosaur eggs had washed away from their paleo nests. Further investigations with expert digging would provide a wealth of information regarding the paleobotany and paleozoology. A portion of the area should be turned into a paleo park where the finds can be displayed to the people.”
https://telanganatoday.com/this-dinosaur-still-stands-tall
https://www.deccanchronicle.com/nation/current-affairs/281016/negligent-telangana-has-no-plans-for-a-fossil-park.html