April 21, 2018
Handloom to date remains one of the most rich traditional practice of the country. Geometric patterned durries remain the most famous durries from Warangal and are in demand both in national and international markets.

Lack of self-branding and promotions are the reasons that Durries made in Warangal are unable to market their uniqueness.


Warangal's famous durries are now available to the world: Weavers sell their products on Amazon

Recently, e-commerce giant Amazon signed a Memorandum of Understanding with the Telangana Department of Handlooms and Textiles to help handloom clusters in Warangal, Pochampally etc.

Durries of Warangal to date remain one of the few crafts left in the country that is still done by hand. It is still amazing to find weaver’s making an entire durry with traditional looms even when the rise in technology has led to the introduction of Power looms.

In recent years, screen printing techniques and kalamkari prints were adapted to Warangal durries, extending the range of products. The designs that are characteristic of Warangal durries are geometric, angular motifs and coloured horizontal stripes.

Warangal durries have been famous for many reasons. The famous durries or rugs are made using vegetable colours, and are washed in flowing water after the printing process and became a renowned hub for weaving these rugs due to the availability of cotton, which is grown by farmers in the area. The craft has never faced the shortage of materials at any point of time.

The colours used are distinct with reds and blues used in combination with neutral colours. The designs range also has flat weaves with raised or extra weft patterns. Pit looms and frame looms equipped with pedals are prevalent. A wide variety of durries are woven in cotton and also some jute and wool based durries for export and the home market.

The weaver’s continue to make the durry at minimal wages as it is the only practice they were taught by their elders. But the art of making durries is at a risk of continuation and needs protection. The weaver’s do not feel the competition as they are not exposed to the market demands, for them government purchases are enough to keep them going.

Granted the Geographical Indication (GI) tag in March 2018. Once a GI tag is allotted to a product, the name becomes unique to that geographical area and cannot be used for products that are manufactured outside of it. Violation of GI tags is a punishable offence under the law.

Warangal has long been an important durry-weaving centre with a strong local flavour. The tradition of making Durries in Warangal dates back to the Mughal era, when the Mughal army came down to south in Deccan region of India, an army comprising of artists and craftsmen started making carpets and sooner the local people had accepted it as their part of regular income, passed down from one generation to the next for more than hundred years. It is highly labour intensive rural based cottage industry.

The weavers in Warangal are either organized in cooperatives or work independently. A weaver's day usually begins at 6 in the morning-getting ready for the day ahead. Weaving is a year round job, the only holidays are on Eid and Amavasya when it is believed that work should not be carried out.

Females are active members in the process of making a durry. Both men and women have to work to ensure a basic standard of living. While the pit loom is only operated by men all other activities are carried out by females. Right from spinning the yarn to even operating the frame loom, the women carry out these functions very efficiently. One can also find women sitting outside household winding and spinning yarn that is then taken for weaving. Weaving a durry is hence a multi- fold process that starts right from the house of a weaver.


Weaver's rely heavily on natural light and one cannot find many tube lights or even fans at the workplace. The ceilings have been designed in a way to allow maximum sunlight to come inside, but during winter season or rainy days when the sun is not too kind, the weavers have to wrap up work early. Ventilation and Cleanliness are major concerns at the workplace. Since the raw material is cotton yarn one can find cotton fibres everywhere. These fibres are not removed on a regular basis as the administration feels that since it gets dirty so quickly, why bother to clean it.

Warangal Durries are made on 3 different types of looms.

Pit Loom: A pit loom is used for weaving the carpet, which will be at ground level and is basically pedal and hand operated. The Shuttle is manually moved by hand. It is called Pit Loom because a pit needs to be dug in the ground for inserting pedals.
Frame Loom: Similar to pit loom, it has a pedal but doesnot need a pit to be dug. The only major difference is that in a frame loom the shuttle is not operated by the weaver but moves through a mechanism of pulling.
Power Loom: All operations on a power loom are automatic and only require manual insertion of the yarn. 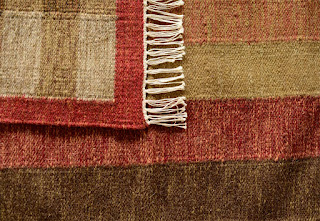 Durry weaving is an established industry in Warangal with a large population of skilled weavers and facilities for dyeing. though the number of weavers have increased over the years, sales haven’t gone up proportionally.

These fine craftsmen are well known all over, as their durries have managed to become popular across India as well as abroad.

According to the Handloom Export Promotion Council, 80% of the handwoven durries sold in European and American markets are woven in India.

Pitta Ramulu is the first weaver to get recognised with a national award, according to The Hans India. He had won the ‘‘National Handloom Award’ for 2015. Ramulu’s durries can be found on Amazon.

After finishing his sixth standard, Ramulu started to learn weaving at the age of 11 from his father P Rajeeru. They hail from Ankushapur in Chityal mandal and settled at Kothawada in Warangal in the 60s. He became a master weaver with the experience he gained from his father. He got APITCO training in 2001 in advanced weaving techniques.

For the award-winning durrie, Ramulu took the help of his tech-savvy sons Shanker and Sainath to get the hunting scene of Mughal era depicted in a painting which is displayed in a London museum. “It is an antique and complicated design. The efforts on the design got me the accolades,” Ramulu said.

Explaining about the work put into the durrie, Ramulu said that special type of yarn was picked up to match the pit loom’s dimensions. Special efforts were made to choose the dyes that match the painting and last long.

“I would continue to innovate with new designs. The award would help to get free entry at national and international level handloom exhibitions and ensure a good market for Warangal durries. I have displayed my products in Mumbai, Chennai, Suraj Kund and other places,” Ramulu said.