April 01, 2017
The Nacharam Gutta houses a revered Lakshmi Narshima Swamy temple, in the Wargal Mandal, Siddipet district of Telangana, India. This place is about 50 kilometers from the state capital. The temple is believed to be 600 years old. The Lakshmi Narsimha Swamy temple is a cave temple, situated on a beautiful hillock.

Inside the sanctum (Gharba Gudi), we can see Swayambu Narashima Swamy along with his consort Lakshmi thayar beautifully carved inthe rock. The temple also has some more idols. According to the Hindu Mythology, Naradha forfeited here. The place got its name Nacharam gutta after a devotee by the name Nacharam. As we go round the temple, we can find a flight of stairs to the left side, these stairs lead us to the darshanam of Lord Shri Soorya Narayana. 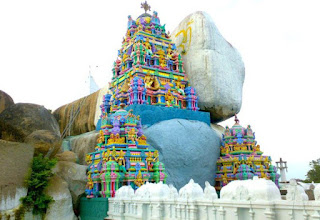 The temple has a beautiful rajagopuram with images of Gods and Goddesses carved on it in multi-colours. A gold coated Dhwajastambha which made up of a metal is installed opposite Garbhagudi.

There are sub-shrines in the temple for Sun-god, Lord Dattatreya, Lord Shiva in the form of Linga, Lord Rama and a Navagraha mandapam.

Sri Lakshmi Narasimha Swamy Temple is located in Nacharam, 47 km from Hyderabad and accessible by road.

This temple Opening & Closing times is 5.00 AM and 8.00 PM. During this period major part of the Lord Lakshmi Narasmiha Swami rituals are performed. Archana, Aarti and Abhisekham are the daily pujas performed.

By Road: Buses are available from all places in Telangana to reach the temple in Nacharam Gutta which is 50 km away from Hyderabad. You could also drive or rent a cab to get to Nacharam Narasimha Swamy temple.