On September 2, 1947, a patriotic desire to hoist national flag in 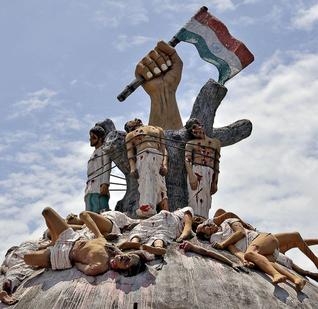 Parkal, then a small village in Warangal district, had ended a brutal massacre committed by Razakars.

The memories of the carnage are still remembered by the elders who witnessed the incident at that time. The incident has been referred to as the ‘Jallianwala Bagh’ of the south by former Premier P V Narasimha Rao.

It may be recalled that after Indian Independence on August 15, 1947, erstwhile Nizams of Hyderabad denied joining Indian Union and also enforced suppression against hoisting the tri-colour employing tyrannical army of Razakars. Anguished at not being allowed to hoist the national flag, the residents of Parkal and surrounding villages planned to raise the flag on September 2 to celebrate the Independence and gathered near a ground in Parkal. But an official of Nizams’ regime Ziauallah Khan cautioned the public to disperse.

But the public charged with patriotic fervour went ahead to hoist the flag. Then the Nizam’s police resorted to lathi charge and then opened fire killing people indiscriminately, explained nonagenarians Basani Murari and Reguri Chandra Reddy who witnessed the incident. “The Razakars ambushed those who wanted to hoist the flag and fired at them killing about 13 persons at Parkal and nine persons at other places,” they told The Hans India recalling the tales of dictatorial rule of Nizams.

“Everyone wanted to be liberated from Nizam’s tyranny as they are not allowed to hoist the national flag though the country was liberated from the rule of the British,” said freedom fighters P Veeraswamy and P Vaikuntam. According to Vaikuntam, Razakars tied three people to a tree and shot them brutally at Rangapuram village and they looted gold and money and molested women at Laxmipuram and set the village on fire.

In 2003, former Union minister and present Maharashtra Governor Ch Vidyasagar Rao had built a memorial called ‘Amaradhamam’ at Parkal paying tributes to the massacre victims. The memorial was built in memory of his mother by Chennamaneni Chandramma Trust of Karimnagar. Incidentally, the back cover of the book titled ‘Uniki’ authored by Vidyasagar Rao and released by President Pranab Mukherjee some time back, features a picture of ‘Amaradhamam’ as a mark of respect to those who laid down their lives to fulfil their desire to hoist the national flag.