September 04, 2017
Devuni Gutta temple is located 2.5 km away from Kothur village, near Jangalapalli of Mulugu mandal in Mulugu district. 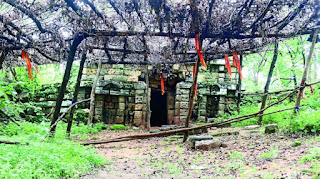 It is only when one chats up with the villagers of Kothur that the temple is mentioned. The journey to reach this temple is as interesting as the temple itself.

The temple is on a densely forested hill locally called ‘Devuni Gutta’. One has to walk from the village through a forest. About halfway up, the path becomes a water path — a stream or a rivulet that one can walk through. The watery path runs for a kilometre at least. Even as you enjoy the walk, you also get to see beautiful waterfalls at several places.

Upon reaching the top of the hill, one comes upon this absolutely stunning temple with carvings on all four walls sitting snug within a lush green environ. It looks like it is made of bricks but up close one can see that the blocks are a mixture of sand and stone. Lime mortar was used for plastering. The carvings were made on these square and rectangle shaped blocks. Sages, Buddhist monks, dancers, even some animals can be identified though on the sculpted stone, but a lot of has eroded over time. The sanctum sanctorum also has several such carvings. Historians estimate the age of the temple to be more than 2000 years.

Locals say there used to be a Shiv Linga inside the temple but it was stolen by treasure hunters about 50 years ago. Close to the temple is a pond. “The water in this pond seeps underground and flows down as a stream. This water is useful for us to irrigate our crops. What is not used flows into the Laknavaram Lake. Other-wise, if there’s no rain for 15 days, the pond dries up,” said a villager, Veeram-aneni Ravinder Rao.

If the district administration takes the required steps, this place could be another tourist spot for trekkers and adventurers, feel local tourists. But yes, a little more research would lead to more interesting details about the temple that would also enhance its touristy charm.

Dr Corinna Wessels-Mevissen, a senior art historian from Germany, who saw pictures of the temple, termed it as extremely interesting and said that it could turn out to be a discovery like no other.

"The style that may date to the late Gupta/post-Gupta periods is unknown to me. It may be linked to the early Odishan style of temple art or that of Rajim and Sirpur in Chhattisgarh. The presence of Amaravati-style spoils is of course interesting," she said.

Local historian Sriramoju Haragopal said the work on the temple suggests it could belong to the sixth or seventh century.