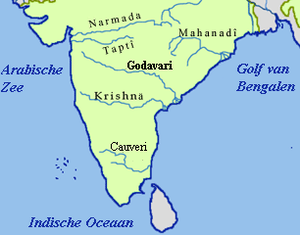 The Godavari River is the second longest river in India after the river Ganges and the largest in Peninsular India.
Asmakas one of the shodasa (sixteen) mahajanapadas in the 6th century BCE, ruled there kingdom from the banks of Godavari river.
It flows for about 283 km and separates the Chanda district of Maharashtra and Bastar district of Madhya Pradesh from this region.

Enters Telangana near Basar in the Adilabad district and divides the district of Nizamabad and Karimnagar to the south and Adilabad to the north.

About 12 km after entering Telangana it merges with the back waters of the Sriram Sagar Dam. The river after emerging through the dam gates, enjoys a wide river bed, often splitting to encase sandy islands. The river receives a minor but significant tributary Kadem (Kadam) river. It then emerges at its eastern side to act as state border with Maharashtra only to later enter into Khammam district. In this district the river flows through an important Hindu pilgrimage town - Bhadrachalam. The river further swells after receiving a minor tributary Kinnerasani River and exits into Andhra Pradesh.

The Kuntala Waterfall are formed on this river at Kuntala. The waterfall originates from a confluence of several ponds that lead to the river Kadem and it cascades down as two separate waterfalls adjacent to each other.
Kaddam Project also called as Kaddam Narayana Reddy Project, which is a Major Reservoir across river Kadem near Kaddam Mandal, Nirmal District.
Pranahitha River
Maner or Manair River
Tributaries : Boggulavagu, Kodaliar, Mohidummeda, Medivagu, Rallvagu, Salivagu, Shanigaram, Yellamagadda Vagu Rivers.
The river Manair, a tributary to the Godavari, originating near the village Kalkur with total length of 170 kms. It traverses through the Karimnagar district from the west to the east and as far as Kuriagunta in Mantheni taluk, then flow towards the north and falls into the Godavari in Mantheni taluk at 225 feet. It stretches to a length of about 130 km. in the Karimnagar district and forming important source of irrigation. Peddavagu and Chinnavagu are the other minor rivers in the Karimnagar District. It has a total catchment area of 13,106 square kilometers.
Manjira River
Tributaries: Alair, Haldi, Koulasnala, Mohidemada, Lendi and Nallavagu
The Manjira is a tributary of the river Godavari. It passes through the states of Maharashtra, Karnataka and Telangana total length of 370 kms. It originates in the Balaghat range of hills at an altitude of 823 metres (2,700 ft) and empties into the Godavari River near Kandakurthi, Renjal, Nizamabad, Telangana after a course of 100 kms at a height of 724 m. It has a total catchment area of 30,844 square kilometers (3,084,400 ha).
Nizam Sagar was constructed across the Manjira River between Achampeta and Banjapalle villages of the Nizamabad district in Telangana, India. The most outstanding feature of the project is the gigantic masonry dam sprawling across the river for 3 kilometers with a motorable road of 14 feet width.

The Singur Reservoir on Manjira River in Medak District is the main drinking water source for the Medak and Nizamabad districts as well as the adjoining twin cities of Hyderabad and Secunderabad.
Moyatummeda, a tributary to Manner, Peddavagu and Chinnavagu are the other rivulets, which sustained ancient cultures in this region.

The River is used for water transport between Sironcha(MH) and Kaleswaram(TS). It is also a part of the 12 rivers in the Pushkaram list which is a festival in Hindu traditions.
Kinnerasani River
Tributary: Murredu