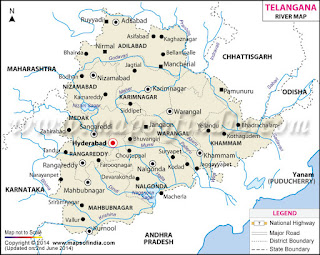 It flows east to Wai and then in a generally southeasterly direction past Sangli to the border of Karnataka state. There the river turns east and flows in an irregular course across north-central Karnataka and then to the southeast and into southwestern Telangana state near Tangadi Village in Mahabubnagar . It then veers southeast and then northeast, forming a portion of the border with Andhra Pradesh state. Turning east it flows into Andhra Pradesh to its delta head at Vijayawada, and from there flows southeast and then south until it enters the Bay of Bengal.

Telangana is separated from Andhra Pradesh by the Krishna River, which acts as a geographical divider between the two. It flows through the state of Karnataka before entering Telangana State in Mahabubnagar and flows through Nalgonda.
Tributaries of Krishna river in Telangana are Tungabhadra, Bhima, Dindi, Haliya, Musi, Paleru and Munneru