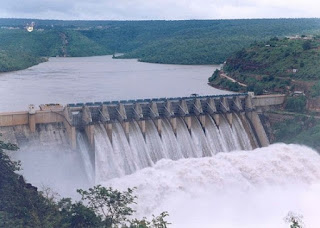 It flows east to Wai and then in a generally southeasterly direction past Sangli to the border of Karnataka state. There the river turns east and flows in an irregular course across north-central Karnataka and then to the southeast and into southwestern Telangana state near Tangadi Village in Mahabubnagar . It then veers southeast and then northeast, forming a portion of the border with Andhra Pradesh state. Turning east it flows into Andhra Pradesh to its delta head at Vijayawada, and from there flows southeast and then south until it enters the Bay of Bengal.
Telangana is separated from Andhra Pradesh by the Krishna River, which acts as a geographical divider between the two.

It is a major source of irrigation for Maharashtra, Karnataka, Telangana and Andhra Pradesh. The delta of this river is one of the most fertile regions in India and was the home to ancient Satavahana and Ikshvaku Sun Dynasty kings.

Srisailam Dam
The Srisailam Dam is constructed across the Krishna River on the border of Mahabubnagar District, Telangana and Kurnool district, Andhra Pradesh near Srisailam temple town and is the 2nd largest capacity working hydroelectric station in the country.

The dam was constructed in a deep gorge in the Nallamala Hills in between Mahabubnagar and Kurnool districts, 300 m (980 ft) above sea level.

Bhima River
Length   : 861 km (535 mi)
Drainage : 70,614 km.
The longest tributary is the Bhima River, originates near Bhimashankar Temple in the Bhimashankar hills in khed Taluka on the western side of the Western Ghats, known as Sahyadri, in Pune District, Maharashtra state.

The Bhima River is a major river in South India. It flows southeast through Maharashtra, Karnataka, and Telangana states, before entering the Krishna River. After the first sixty-five kilometers in a narrow valley through rugged terrain, the banks open up and form a fertile agricultural area which is densely populated.

Tungabhadra River
The largest tributary of the Krishna River is the Tungabhadra with a drainage basin measuring 71,417 km running for about 531 km.

The Tunga and the Bhadra rise at Gangamoola, in Varaha Parvatha in the Western Ghats at an elevation of 1198 metres in Chikmagalur District of Karnataka along with the Nethravathi (west-flowing river, joining the Arabian Sea near Mangalore).

The Bhadra river flows through the industrial city Bhadravathi. More than 100 tributaries, streams, creeks, rivulets and the like contribute to the two rivers.

The Tungabhadra River is formed by the confluence of the Tunga River and the Bhadra River at Koodli at an elevation of about 610 metres near Holehonnur, about 15 km (9.3 mi) from Shimoga.
It is a confluence of both the Dwaitha and the Adwaitha philosophies.

From there, it mingles with the Krishna at Gondimalla, near the famous Alampur in Mahabubnagar District of Telangana, Jogulamba is the presiding deity, known as Dakshina Kashi are the other important pilgrimage centres. There is a cluster of Nava Brahma temples constructed by the early Chalukyas

Musi River
Length  : 256 Km (159 miles)
Drainage : 2219
The river originates in Anantagiri Hills near Vikarabad, Ranga Reddy district, 90 kilometers to the west of Hyderabad and flows due east for almost all of its course. It joins the Krishna River at Vadapally in Nalgonda district.

It flows through a major portion of Hyderabad, India and divides the historic old city with the new city. It was known as Muchukunda river in olden days, and the precise reason for the change of name is not known.

There are many bridges across the river in Hyderabad. The oldest bridge, Purana pul (meaning 'old bridge') was built during the reign of Ibrahim Qutub shah in 1579 A.D. Nayapul (meaning 'new bridge'), near High Court was added later. There are other bridges in Dabirpura, Chaderghat, Amberpet, Uppal Kalanand Tekumatla near Suryapet.

The Musi river was the cause of frequent flood devastation of Hyderabad city until the early decades of the 20th century. On Tuesday 28 September 1908, Hyderabad witnessed disastrous floods of the River Musi, flowing through the city.

Abdallah Ahmed Bin Mahfooz submitted his report on October 1, 1909, with recommendations on preventing a recurrence of floods and improving civic amenities. Nizam VII constituted a City Improve Trust in 1912. He built a flood control system on the river. A dam was built in 1920 across the river, ten miles (16 km) upstream from the city called Osman Sagar. In 1927 another reservoir was built on Esi (tributary of Musi) and named Himayat Sagar. These lakes prevented the flooding of the River Musi and are major drinking water sources for Hyderabad city.

Dindi River
Dindi origin is Shabad Hills near about Muhalgidda (Mahabubnagar District) and joins Nagarjunasagar through Dindi reservoir.
Dindi Reservoir is a medium water reservoir Dindi town in Mahabubnagar. It is part of Srisailam Left Bank Canal.It is close to Nagarjunsagar-Srisailam Tiger Reserve, around 95 kilometers from Hyderabad.

The Dindi Lift Irrigation Scheme envisages drinking water to fluorosis-affected areas and irrigation facilities to drought-prone areas of Devarakonda and Munugodu constituencies in Nalgonda district. The LI scheme will also cover some parts of Achampet and Kalwakurthy constituencies in Mahbubnagar district by lifting the flood water from the foreshore of Srisailam reservoir to Dindi Reservoir at 0.5 tmc per day for 60 days to a quantum of 30 tmc.

The lifting of water involves two stage pumping, two offline and three online reservoirs system. The gross command is 3,68,880 acres and the net commendable area is 3,41,000 acres under Dindi lift scheme, which will cover five mandals in Mahbubnagar district and 14 mandals in Nalgonda district.

The state government accorded administrative approval to the line estimate of Dindi Lift Irrigation Scheme for an amount of `6,190 crore.


Hallia River
The Hallia, a small river taking its origin in the hills west of Narayanapur in Nalgonda taluk, flows in a south easterly direction for about 45 miles where it is joined by kongal river and continuing in the same direction falls into krishna river.

During the Nizam rule, a reservoir was constructed on the river at Paleru town in Khammam, Kusumanchi. Hundreds of acres are irrigated with the help of this reservoir. Paleru reservoir acts as a balancing reservoir to the Nagarjunasagar left canal.

The Muneru takes its birth at Yelbuligutta near Krishnapuram Village of Narasampet Taluq of Warangal District. At a distance of about 19 km. from its origin, it joins Pakal lake, a fesh water lake, presently used by the local people for drinking and irrigation purposes. The Muneru river, after running for about 38.4 km. From Pakal lake, it receives the waters of another rainfed stream known as Vattivagu near Govindapuram village of Mahabubabad Taluq.

The Akeru river, another tributary of the Muneru rises in the north eastern Fringes of Janagoan Taluq of Warangal District near Bonthaghatnagaram flows in the South Eastern direction and after receiving rain water of Ghanapur, Vardhannapet, Nallikoduru and Nandikodur Mandals in Warangal District joins the Muneru at Thirthala in Khammam District.

The river Wyra, another tributary of Muneru originates in the hill zone of Yellendu Mandal and after passing through Timmarajupet Mandal joins Wira lake. There after it form a tank near Singarayapalem and then flows after receiving the waters of another hill stream Kattaleru near Chilakaluru south wards into Madhira Taluq and joins river Muneru near Jalapalli in Krisha District.

Besides these streams, there are also minor independent rainfed tributaries of Muneru river such as Minaga Vagu, Kucha Vagu, Chavati Vagu, Yanugadda Vagu and Nallavagu which are active only during rainy season and dry away during lean and hot seasons.

The Telangana government has made the necessary arrangements at Pushkar ghats in Nalgonda (34) and Mahabubnagar (52) districts at an estimate of `680 crore. The government is expecting as many as 3.34 crore devotees to take holy dips in the river during the Pushkarams.

There are many shrines and temples along the banks of the river Krishna, which arises in Mahabaleshwar in Maharashtra and passes through Karnataka, Telangana and Andhra Pradesh and joins the sea at Hamsaladeevi.

One of the 12 Jyothir-linga temples and two of the 18 Shakthi Peethas are located in Telangana and its border. Besides the Jyothirlinga and Shakthi Peetha at Srisailam, the state has the Alampur Jogulamba Shakthi Peet-ha near the river Krishna.


There are also two Hanuman pilgrimages at Beechpally and Pedda Chintarevula.
These are among five temples in which idols of lord Hanuman were installed by Vyasaraya Theertha, the guru of Madhva Parampara, in a single day. These are also along the banks of the river.

The Krishna enters Telangana at Krishna village in Maganur mandal of Mahabubnagar district and exits into Andhra Pradesh from Nagarjuna Sagar. The government has deployed 200 police personnel at each ghat, beside at least 20 expert swimmers at major ghats and other staff including sanitation, health RWSS, electricity etc.

Ghats, pilgrimages and accommodation along the Krishna

Krishna ghat
This ghat is located in Maganur mandal of Mahabubnagar district. Renowned Datta mandir, Ksheera Lingeswara temple and Venkateswara temples are located at the meeting point of the rivers Krishna and Bheema. Paspula ghat in Makthal is also very cloase to Krishna Ghat.
Distance from Hyderabad: 185 km
Transportation: RTC runs buses from Hyderabad to Raichur via Mahabubnagar and Makthal. Railway passengers can reach Krishna by any train from Hyderabad to Bengaluru.
Accommodation facilities: Yatri Nivas Hotel and Vivekananda Ashram

Rangapur ghat
This ghat is located in Pebber mandal. Ranganayaka Swamy temple is renowned in Rangapur. Besides this, Abhyayanjaneya swamy temple is located nearby the ghat.
Distance from Hyderabad: 150 km and 86km from Mahabubnagar town
Transportation: RTC busses are available from Hyderabad, Mahabubnagar and Kurnool
Accommodation facilities: Temporary sheds have been constructed

Beechpally ghat
This is the major ghat in Mahabubnagar district. Pushkarams in Telangana will begin at this ghat. Abhayanjaneya swamy temple, Shivalayam, Kodanda Ramalayam and Hayagreeva Gnana Saraswathi temples are located on the banks of Krishna here.
Distance from Hyderabad: 168 km
Transportation: RTC buses are available from Hyderabad, Kurnool and Raichur. Train passengers should go up to Gadwala from Nampally and use public transport to reach Beechpally for 16 km
Accommodation facilities: A few rooms are available in R&B guest house

Somashila ghat
This ghat is having VIP and General ghats. Dwadasha Jyothirlingalayam is located on the banks of Krishna here.
Distance from Hyderabad: 200 km
Transportation: Buses are available from Hyderabad to Jadcharla. Commuters should take local buses from Jadcharla to Kolhapur via Nagarkurnool.
Accommodation facilities: Only one lodge at Kolhapur. The government is planning to provide rooms in government schools and offices. Nagarkurnool and Wanaparthy have some lodges.

Vadapally
Vadapally is having renowned and historical Laxminarsimha swamy temple and Vadapally Meenakshi Agastheswara Swamy temples.
Distance from Hyderabad: 180 km
Transportation: Take bus to Miryalaguda and then take a local bus to the ghat.

Mahankali & Mattapally
These ghats are located near Miryalaguda. Mattapally Laxminarsimha Swamy temple is famous shrine. Besides this, Parvathi Ramalingeswaralayam, Godadevi temple and Hanuman temples are located nearby these ghats.
Distance from Hyderabad: 186 km
Transportation: Busses from Hyderabad to Miryalaguda and Hujurnagar
Accommodation facilities: Annadana satrams, lodges and hotels are available