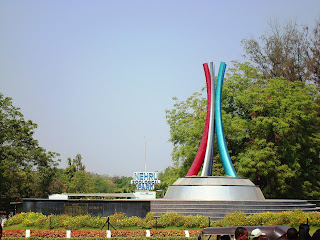 Nehru Zoological Park or Hyderabad Zoo is located in Bahadurpura, Hyderabad, Telangana, India was established October 26, 1959. It was declared open to the public on October 6, 1963. The Park extends over 380 acres, abutting the Miralam Tank on the southern side and National Highway No.:7 on the eastern boundary. It is the premier recreation spot in the twin cities of Hyderabad and Secunderabad.

Whild Animals like Blackbuck, Spotted Deer, Peafowl, Crocodiles, etc which have been bred in the Zoo have been rehabilitated in the sanctuaries and National Parks of the State.

Nehru Zoological Park, Hyderabad is one of the first zoos in the Country to display the animals in open moated enclosures with no barriers in between the visitors and the animals. The zoo was established with this concept and was opened to public viewing on 06.10.1963. Since then the zoo kept on adding new facilities. The Lion Safari Park which was established in 1974 and Nocturnal Animal House established in the year 1982 were first of its kind in the country.

During this period most of the animal enclosures and visitor facilities were revamped. Efforts were made to make the zoo a plastic free area, A Plastic regulation counter was opened at the entrance gate which provides paper bags in place of polythine bags. Additional booking counters, Visitors Shelters, resting areas were created for the visitors.

This Zoo is spread over an area of 380 acres and a visitor can't see all the enclosures in one day on foot. Therefore bicycles were introduced in the zoo, and the visitors can hire these bicycles and can go around the zoo. This is helping the visitors in visiting the zoo completely.

There is more charm to a visit to the Nehru Zoological Park these days for few more species have been added to the wide and varied collection of animals, birds and reptiles here.
A pair Himalayan Goral which was brought here from Chattbir Zoo of Punjab as part of animal exchange programme last year, has given birth to a fawn a the zoo on Monday.
And there’s more. A pair of Albino Black Buck which was also brought under exchange from Chattbir Zoo too have given birth to a fawn a few weeks ago.
The zoo veterinarians said the new borns were in good health condition and are being cared by a team of animal keepers.

Now, those visiting the Nehru Zoological Park can book their ticket online by a few clicks, and avail WiFi facility within the Nehru Zoological Park premises. Minister for Forests and Environment Jogu Ramanna on Wednesday inaugurated the online portal www.hyderabadzoo.com which one can visit to book the tickets. This is the first time that any zoo in the country has introduced this facility, he said.

Those who book online will get their ticket on their mobile phone, which they can swipe at the special entrance for online bookings to enter the zoo. The online facility will be maintained by an outsourced agency, and handling charges will be levied on the tickets, apart from service tax and Swachh Bharat cess.