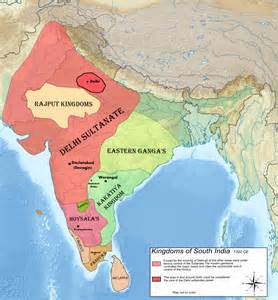 Kakatiyas are descendants of Karikala Chola King of Durjaya clan, who initially started as vassals of the Chalukyas in India, and later emerged as a ruling dynasty, with their capital at Kakatipura (probably named after the village diety, Kakatamma) or present day Warangal, in the state of Telangana, India.

Kakatiyas were the devotees of Goddess Kakati.

They were said to originate from Chaturthakula and they allied themselves by matrimony to chiefs of the Shudra caste, although in many documents related to gifts given in the Brahmins, their ancestry has been traced to the Solar dynasty of the Ikshvaku kshatriyas.

The Kakatiya period was rightly called the brightest period of the Telugu history. The entire Telugu speaking area was under the kings who spoke Telugu and encouraged Telugu. They established order throughout the strife torn land and the forts built by them played a dominant role in the defence of the realm. Anumakonda and Gandikota among the 'giridurgas', Kandur and Narayanavanam among the 'vanadurgas', Divi and Kolanu among the 'jaladurgas', and Warangal and Dharanikota among the 'sthaladurgas' were reckoned as the most famous strongholds in the Kakatiya period. The administration of the kingdom was organized with accent on the military.

Though Saivism continued to be the religion of the masses, intellectuals favoured revival of Vedic rituals. They sought to reconcile the Vaishnavites and the Saivites through the worship of Harihara. Arts and literature found patrons in the Kakatiyas and their feudatories. Tikkana Somayaji, who adorned the court of the Telugu Chola ruler Manumasiddhi II, wrote the last 15 cantos of the Mahabharata which was lying unfinished. Sanskrit, which could not find a place in the Muslim-occupied north, received encouragement at the hands of the Kakatiyas. Prataparudra was himself a writer and he encouraged other literature.


The Kakatiya dynasty expressed itself best through religious art. Kakatiya art preserved the balance between architecture and sculpture, that is, while valuing sculpture, it laid emphasis on architecture where due. The Kakatiya temples, dedicated mostly to Siva, reveal in their construction a happy blending of the styles of North India and South India which influenced the political life of the Deccan.
Building temple and lake (an irrigation tank ) side by side was the tradition of the Kakatiya.

Motupalli port was famous for foreign trade during the period of Kakatiyas.

Ministers during the period of Kakatiyas were called as Tirthas.

The gold coin during the period of Kakatiyas was called as Gadvanam.

The remains of immense irrigation tanks and channels show that the rulers of the country devoted great attention to the improvement of agriculture.

There was enormous accumulations of wealth, consisting of gold, precious stones (including Kohinoor diamond), and elephants. The people appear to have been brave, happy, and prosperous, and from west to east there were scattered about numerous holy shrines which brought together thousands of pilgrims. It was this wealth that attracted the cupidity of the Mahomedans.

c.824 - 870 : Gunda II
The first three chiefs are known only due to references by later Kakatiyas. None of the events that took place under their reigns are known, as no contemporary records for these chiefs exist.

870 - 895 : Gunda III  Son. Rashtrakuta vassal.
895 AD : Mangalu Charter, Chalukyan records mention that Itimartiganda, the eldest son of King Bhima I, killed a Rashtrakuta general named Dandena Gunda during one of the invasion. Gunda III dies fighting for his overlord, the Rashtrakuta king Krishna II (878-914), against the Eastern Chalukyas ruled by King Bhima I (892-921).

895 - 940 : Erra / Erriya  Son. Rashtrakuta vassal. Ruled from Kakatipura. Erra is given the land of Kurravadi in Warangal, in repayment for the services of his father.

950 - 995 : Gunda IV / Pindi Gunda  Son. Rashtrakuta vassal.In 970 Gunda IV supplies help to Danarnava on behalf of his master, Krishna III, to help him set aside his brother, the Eastern Chalukyan king, Amma II, and occupy the throne of Vengi. As a result, Gunda is gifted with Natavadi / Manigallu as a token of gratitude.

996 - 1052 : Beta I / Garuda Beta Son.
General : Recherla Brahma
According to the Guider epigraph, Beta was too young to rule when his father was killed. The Kakatiya family was in dire straits at this time, being deprived of their lands as well as an adult male head. They were saved from extinction by the grace of Kamavasani, the wife of Viriyala Erra. Kamavasani was most likely related to the Kakatiyas in some way, and she might also be identical with the figure of Kuntaladevi mentioned in the Siddheshvaracharitra, who is also credited with saving the Kakatiya family. Under Kamavasani’s guidance and protection, Beta eventually rose to become the ruler of Anumakonda under Western Chalukya suzerainty.

Beta was thus the first of his family to rule in this region, which would become the core territory of the Kakatiyas, and remain under their rule until the final demise of the dynasty.Garuda is a great warrior who probably joins the Western Chalukya armies of Someswara I in the Chola invasion of 1052. Along with his general, Recharla Bramha, he destroys the Chola armies (of King Rajadhiraja I) and enters the city of Kanchi. He later kills the warriors Anuma and Konda who ruled over their capital Anumakunda or Hanumakonda.

1076 - 1108 : Beta II (Tribhuvana Malla) Son.
Generals : Recherla Kata I, Malyala Danna
Supported Chalukya Vikramaditya VI in his conflict against his brother, Somesvara II. When Vikramaditya won the Chalukya civil war and became king in 1076, he thus conferred on Beta the title of Vikrama-chakrin. Beta was also able to obtain Sabbinadu (Sabbi-1000) in the modern-day Karimnagar district from the Chalukya king. Besides this, not much else is known about this Kakatiya ruler.

1108 - 1116 : Durgaraja Son
Generals : Recherla Kata I, Malyala Danna
Durgaraja began actively participating in the Kakatiya administration even before his father's death. We know this because the only inscription of Durgaraja is dated to 1098, while the last record of Beta II is dated to 1108. However, less than a decade after Beta II's death, another of his sons, Prola II, was in power. The Kotapalli epigraph states that Prola II offered asylum to his brother's son (i.e. the son of Durgaraja), which suggests that the reign of Durgaraja came to a sudden and violent end. It is quite likely that there was a power struggle between the two brothers Prola II and Durgaraja, and that Prola II himself put an end to Durgaraja's reign. However, respecting the fact that Durgaraja was still his brother, he offered protection for his son (Prola's nephew). Prola was firmly in power by 1116 as the head of the Kakatiyas.

Prolla II is responsible for subduing the Telugu Cholas of Kandur, The Chodas of Kanduru were located south of the Kakatiya dominions. They ruled over the region of Kandurunadu, which comprises parts of modern-day Nalgonda and Mahbubnagar districts. They had two capitals, one at Koduru in the west, and another at Panugallu in the east.

He joined Jagadekamalla in his march against Gundaraja and Edaraja of Manthena Vishaya who were disregarding the kings sovereignty.
Paola II beheaded Gunda (the ruler of Mantrakuta - after having been made to suffer the ignominy of having his head shaved and his breast marked with a boar.) and put to fight Edaraja seizing Manthena on the Godavari.

Defeated Chalukya General Govindaraja and drove him away from panaugallu rajya and restored rajya to Udaya Choda son of Gokarna Choda, chief of Kunduru.

1136 AD : Prolla II is responsible for subduing the Telugu Cholas of Kandur who defeated King Govinda and gave his kingdom to Udayaditya.
1137 AD : Defeated Kumara Tailapa.


1149 AD : The last known Kakatiya epigraph as subordinates is Sanigaram inscription. Tailapa-III or Kuamara Tailapa was defeated by Kakatiya Prola II around 1149 AD and asserts his independence over Western Chalukyas.

The conquests of Prola were confined to the Telugu districts. He appears to have improved the irrigation of the country by building tanks.

1158 AD : Prola II was killed in the battle attacking Velanati Chodas and presumed killed by Choda II in his fathers reign supported by Kota Choda.

1158 - 1195 : Rudradeva / Prataparudra I Son.
General :  Recheral Kata II, Recherla Rudra
An ambitious king, Rudradeva extends the boundaries of his kingdom: in the north (taking in modern day Karimnagar, and East Godavari); in the south (where he turns his attention to the Kondur Telugu Chola kings Bhima and Chodur in Nalagonda and Mahboobnagar, sacking their cities, Vardhamana and Kandur); and in the east (the  Chalukya Chola regions of king Rajaraja III).

Palanadu war took place during the period of Prataparudra I.

The Palanadu chiefs fight amongst themselves, so Rudradeva renders military assistance to Nalagama’s faction. The military strength of Velanadu has been weakened, so Rudradeva exploits the situation by leading his forces into coastal Andhra and conquering territory as far as Srisailam and Tripurantakam in the south (subduing the chiefs of Kota and Kondapadumatis). Rudradeva extends his kingdom to the coastal regions of the Cholas after the death of Kulotunga.

Prataparudra divided his empire into 77 Nayankaras.

The rivalry between the Kakatiyas and Yadavas was started from the period of Prataparudra I.

1195 - 1199 : Mahadeva Brother.
General : Recherla Rudra
1197 : Yadavas of Devagiri captures prince Ganaptideva with the help of kakaitiya feudatories (Harihara, Ganapati, gunda) when the king was not in the fort.

1199 - 1262 : Ganpatideva Son. Died 1269.
General : Recherla Rudra
Rebellions arise in the kingdom but these are crushed by the Kakatiya general, Recherla Rudra and ruled the Kingdom in the absence of Ganapatideva.

1208 AD : Devagiri-Yadava king Singhana states that Ganapati was liberated,' apparently from some confinement, by Singhana's father, Jaitrapala I, and his kingdom handed over to him.

Ganapatideva was greatest among all Kakatiya rulers and ruled for a long period.

Raja Ganapatideva was the most powerful and eminent ruler of the dynasty who expanded the kingdom from the coastal Bay of Bengal in the east to the holy city of Kancheepuram in the south. Well versed in art and culture and literary pursuits, Kakatiya kings were great builders too. The Chalukyan style of temple architecture and decorative skill in sculpting greatly flourished and improved during their reign. These mighty kings were benevolent, egalitarian and able administrators - having democratic outlook in their governance.
Ganapatideva completed building Orugallu (Warangal) and shifted the capital from Hanumakonda to Warangal.


Having no sons, Ganpatideva hands over the reigns of his kingdom to his daughter, Rudramadevi.

1289 : The queen dies along with her general Mallikarjuna Nayak, fighting the Kayastha chief, Ambadeva on Nov 27, 1289 according to the inscription found in Chandupatla.

1296 : The Delhi Sultanate, Jalaluddin Khilji had begun conquering the region of the Deccan Plateau in 1296 during the time when Juna Khan, later to be known as Alauddin Khilji, nephew and son-in-law of Jalaluddin had plundered Devagiri in Maharashtra.

1303 : First Muslim Invasion against Kakatiyas. He wards off the first attack by Malik Kafur in 1303, during the Islamic conquest of India which is centred on the Delhi sultanate Allauddin Khilji.

1316 AD : Malik Kafur masterminded the death of Alauddin Khilji in 1316 and blinded the heir apparent Khizr Khan and Shadi Khan. Mubarak Khan, Khilji's third son escaped the blinding attempt and later Malik was assassinated by his soldiers whom he sent to blind Mubarak.
1318 - 1319 : Third Muslim Invasion when Mubarak Khilji was the Delhi Sultan.

1320 : Prataprudra reasserts his independence as the Khilji dynasty ends and the Tughlaqs come to power in Delhi.

Tughlaqs return a month later with a larger and more determined army. The unprepared and battle-weary Kakatiya army at Warangal is finally defeated, and Prataparudra is taken prisoner.

It is said that he commits suicide by drowning himself in the River Narmada, while on his way to Delhi.

With Prataprudra’s demise, Kakatiya rule comes to an end. Later, the Musunuri Nayaks who had served as army chiefs for the Kakatiya kingdom, unite the Telugu people and recover Warangal from Delhi. They rule the region for half a century.

A history of the Deccan. By J. D. B. Gribble