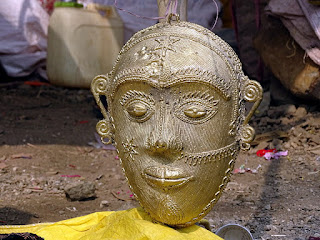 Dhokra is an ancient bell metal craft practiced by the Ojha metal-smiths of Jharkhand, Odisha, Chhattisgarh, West Bengal and Telangana – the style and workmanship of the artisan community being different in different states. In Telangana, the Ojha artisans are also known as Wojaris or Ojjis who create brass metal art objects using the tedious but perfect lost wax technique while casting the metal.

The Dokra artifacts are made in brass and are unique in that the pieces do not have any joints. The method is by combining metallurgical skills with wax techniques employing the lost wax technique, a unique form where mould is used only once and broken, making this art the only one-of-its-kind in the world.

The artisans make bronze and brass objects using the casting technique called dhokra,where a clay model is the core,over which,wax threads are wrapped around to form a layer.This is again covered with yet another layer of clay which has an opening. Molten bronze or brass is poured into this opening, which melts the wax completely, replacing it with brass or bronze. The cast object needs the outer mould to be broken each time.

In Adilabad district, places like Ushegaon and Chittalbori are the main contributors of this art.

What catches your eye in this beautiful craft is that each piece is different from the other.

This work has good demand both in the domestic and international market due to its aesthetic look and primitive simplicity. The work consists of folk motifs, peacocks, elephants, horses, measuring bowl, lamp caskets and other simple art forms and traditional designs.

There are many families in Adilabad district dedicated to this ancestral craft, which is a labor-intensive work.

Very often, the artisans take up only order based work with an advance. The purchase of raw materials would require an initial expenditure beyond their means, more so if the end products do not sell. Dhokra is a very labour intensive as making of a simple piece could consume 4-5 days while more complicated designs could take upto 2-3 weeks. The designs are usually traditional, though they are known to make contemporary designs on demand. The characteristic pieces include slender and elongated metal figurines, folk motifs, elephants, peacocks, horses and household articles like measuring bowls and lamps The unique feature of a dhokra artefact is that the pieces do not have any joints. The entire object is handcrafted with the final product that has a distinct texture depending on the wax strips used in its design.

Things have recently started looking up for the Ojhas of Adilabad as they have tapped into their local markets comprising of the Gond tribal homes and their seasonal jatras or fairs. The idols of local deities – Jangubai, Bheemalpenand Persapen are most popular as are other items used in worship. The study of their return to local markets is unique in the lives of all artisan communities.