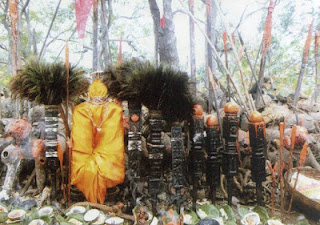 Adivasis celebrate Bheemalpen festival in the month of ‘Margashira’ every year. Adivasis are busy in celebrating their traditional festivals these days in the district.

Adivasis do their cooking with the new crops or beans like ‘chikkudu’, ‘Anapa’, pulses like redgram, rice only after performing special puja called Satti to the Bheemalpen.

Adivasis festivals continue with Jangubai to be held from January 11- February8 in the dense forests near Parandholi in Keremeri mandal on the borders of Maharashtra.

Mesram Mothirao of Gangapur village in Utnoor mandal who led a group of Adivasis to the Demmalrajul, said they have started their journey by walk and they returned to their village three days later after performing pujas to Bheemalpen. Bheemalpen festival is the first one in their festival season and they perform puja with devotion’, he said.

The wooden deities called ‘Devul’ (gods) are bathed (Gangasnan) and taken to their village and to be installed in the sacred place as usual. The Kolam and Gond Adivasis will perform special puja to the Bhemalpen in this season.

These rituals reflect the Adivasis’ sacred bond with the nature and crops they cultivate and sacredness attached to the food grains they consume.

Gondi Dharma Pracharak Sedmaki Seetharam said ‘Bheemaldev festival has much importance in the festival calendar of the Adivasis and they cannot avoid the Bheemalpen festival’.

He said Adivasis will be busy in their festivals Jangubai and Jallidevara (Persapen) which are important for the Adivasis and the popular Adivasi jataras will follow their festivals.