December 17, 2016
Manthani Gauthameswara temple is located in the heritage place of Manthani, this temple is known for its great historical archeological and religious evidence. This temple is mainly dedicated to Lord Shiva, and you will also get to know more about some parts of Jain and Buddhist cultures, as located within this segment. The main deity over here is Gautameswar. There is no such history about its origin, but the lingam is stated to be more or less similar to Thousands pillar temple. 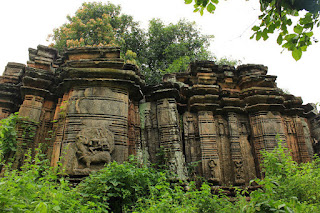 The Kakatiya kings renovated this old temple during their reign and its sculpture is a must see.

The Manthani temple has Godavari river in its surroundings and to its north, there is Bokkala Vaagu however in the southern direction there is a lush green forest. To its east lies Ravula Cheruvu which is a small lake.

This place is considered to be the oldest example of Vedic learning and with a growing knowledge platform for the vacationers. The temple is quite fragile at this point of time, but the idol of Lord Shiva and his bull is quite prominent even now.
Whenever the main area relates to archeological, historical and religious belief, you are always asked to take a trip to this temple. Even though, there are various other temples available too, but nothing can beat the importance of this temple, as dedicated to Lord Shiva.

The old people here say that “Manthani" refers to a pot of buttermilk. Just like butter-milk gets churned into a pot so were the Vedic Mantras that used to churn in this village. So Manthani got its name from Mantra-Mathana, meaning churning of the Mantras.

According to an inscription of Sri Jagadguru Shankaracharya at Dwarakapeetam and Pushpagiri Peetam, Adi Shankara had visited Mantrakootam, now known as Manthani, during early sixth century AD and praised the Vedic customs and Vedic literacy of the people of this place.

These Manthani temples remind of early Jain as well as Buddhist cultures giving an evidence of significance of this place. The temple of Manthani consists of Lord Shiva or Gautameswar as the major deity worshiped. The temple of Manthani in the state of Telangana has a rich cultural heritage as far as historical, archaeological and religious aspects are concerned.

The festival of Shivaratri is celebrated with zeal and enthusiasm and people from different places gather here in large numbers to seek ‘darshan’ of their Lord. The devotees consider this as a sacred place.

There is a huge Shiva Lingam around 1m-1.25m high which is formed of black stone used in the ‘Garbhagudi’ i.e. sanctum sanctorum on an amazingly carved ‘Panawatika’, a pedestral or platform on which there is fixation of phallicemblem as per ‘Somasutra’. There is a small room located in between the room for entrance and Garbhagudi where the idol of Lord Vigneswara was kept in the right corner.

One can see a huge ‘Nandi’ idol placed in the entrance room which has length of about 1.5m- 2m and height of 1m. People say that the nose and ears of the Nandi were destroyed by the Muslim invaders. People coming to this temple also visit the three teerthams found adjoining to this place which are referred to as, the ‘Brahmateertha’, the ‘Vishnuteertha’ and the ‘Rudrateertha’ are regarded as holy places to take a dip in the Godavari river.
How to Get There

Manthani is around 64 kms from Karimnagar, you can find buses to Manthani from most major cities/towns in this region as it lies on the route connecting to important industrial centre of Godavarikhani.

Ramagundam, is around 27 kms away.