December 17, 2016
Jodeghat is a small Village/hamlet in Kerameri Mandal in Komaram Bheem Asifabad District of 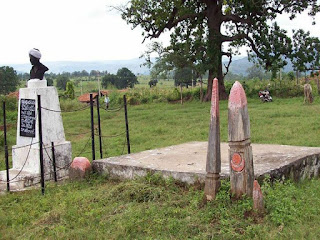 The state government is developing the area as a tourist and historical place by constructing tribal museum, amphitheatre, multi-media hall and Komaram Bheem memorial to attract tourists.

Chief Minister K. Chandrasekhar Rao may inaugurate the arch and lay foundation stone to a park on the occasion of 75th death anniversary of Komaram Bheem on October 27.

The project is being taken up at a cost of Rs 25 crore and sanction was given for Rs 18 crore under first phase. A video album was shot at Jodeghat to popularise the project to attract tourists to develop the place under tourist circuit. The Department of the Tourism is planning to develop the places.

The Principal Secretary Tourism, B.P. Acharya on Friday said the government was contemplating to start a light and sound show at the historic Jodeghat village.

Kumra Manikrao of Jodeghat said for the first time some people are looking like foreigners with grey and white hair came to their gudem and it was cultural shock for many of the villagers present on seeing the dressings, behaviour and body language of foreigners and added that they spoke in English but villagers and one person came with them translated into Telugu.

The foreigners took photographs with villagers and the villagers laughed at them as many of them including women wore shorts. They captured the entire area of Jodeghat and its surroundings of pristine jungles by using Helicopter camera and there was a photo shoot.

Komaram Baderao expressed concern about their indigenous culture and traditions and expressed anxiety about coming days saying that they don’t know what more they were going to see in future after Jodeghat was fully developed as tourist place. Most of Adivasis of the Jodeghat were clueless about what was coming up at their village and some of them say that their leader Komaram Bheem’s puthla (statue) was coming up.

Adivasi leaders have started expressing fear of penetration of non-tribals into interior Jodeghat area and will exploit natural resources in the forest just after project was developed as tourist place.

Adivasis also expressed fear of non-tribals and outsiders will also exploit the gullible Adivasi women in the guise of creating employment under tourism development like in the Araku Valley which was a ere in Andhra Pradesh.