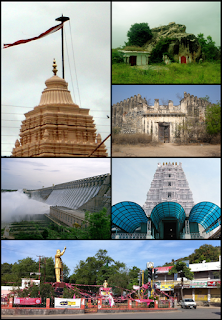 The history of Nalgonda dates back to the Palaeolithic age. On the basis of the gradual evolution of the lithic material, the pre-historic period is studied under the following heads.

During this period, Man fashioned his tools and weapons by chipping hard stones of convenient size and shape. This feature is testified by the findings of an extra-ordinarily interesting unifacial Palaeolithic implements of the Soan type at Yeleshwaram.

Traces of Neolithic culture were found at Chota Yelupu, where sling stones and other objects of interest were unearthed. The existence of Megalithic culture was revealed by the discovery of innumerable burials at various places like Tipparti, Nakrekal, Nalgonda etc.

300 BC - 185 BC :  Mauryan Empire
The political history of the district commences with the Mauryas. Mauryas, during the reign of Asoka, the Great held their sway over this region. Later the region has come under the over lordship of Satavahanas

230 BC  – 220 AD : Satavahanas  ( Were vassals of Mauryan Empire)​
It was during this period the region established trade contacts with Roman empire.
220 AD - 250 AD :Ikshvaku Tribe
Ikshvakus attained control over the region and ruled with their capital Vijayapuri. During this period Sakas and Scythians settled in this region. Buddhism flourished during this period.
250 AD - 500 AD : Vakataka Dynasty
500 AD - 543 AD : Vishnukundins

982 AD - 1158 AD : Western Chalukyas (Kalyani Chalukyas)
Western Chalukyas of Kalyana, who exercised their sway over the present Nalgonda District with Kollipaka, Modern Kolanupaka as headquarters, situated in Bhongir taluk, Nalgonda district which was a subdivision of Kollipaka – 7000.

The Western Chalukas exercised their authority in the district of Nalgonda, with assistance of number of Subordinate chiefs holding the rank of Mahamandaleshwar, besides a major feudatory family namely the Kanduri Cholas, with kanduru in Mahaboob Nager District as their headquarters apart from political and administration matters, these inscriptions furnish information about religious and economic aspects also.

In and around s Panagallu town, which was a trade centre during 11th century river Musi divided this area into two small kingdoms Eastern side of Musi region under the kingdom of Kalyanapura, while the Chalukya emperor Tribhavana malladeva was ruling victoriously, his subordinate Mahapradhana Govindarajulu who was ruling Kondapalli from 300 A.D. to 1123 A.D.

Panagallu had a great importance only because of Panaguallu tank. Which was built ambankments for the storage of rainy water. Stored water has been utilizing for agriculture, now drinking purpose. Panagallu was attracting by pilgrims, luggage transporters, who are taking rest and shelter at Panagallu per a period of timebeing, gradually this place became centre for traveller peoples & traders.

Medieval Period of the district passed under the control of the Kakatiyas from the western Chalukyas.

1158 AD - 1323 AD : Kakatiya Dynasty
Cherukureddy Kings
Amrabad area is ruled by Cherukureddy kings. Inscriptions of these kings at old Shiva temple at Amrabad in 1258 A.D. describes about these kings. The king ruled under the capital of Amrabad and also some part in Nalgonda district.

Kayasthas (1239 AD - 1297 AD)
They were originally stationed by the king Ganapatideva at Panugallu as the governors of that part of the kingdom.
1239 AD - 1258 AD : Ganagaya Sahini
1258 AD - 1268 AD : Jannigadeva (Gangayasahani sisters eldest son)
1268 AD - 1272 AD : Tripurari I (brother of Jannigadeva)
1272 AD - 1294 AD: Ambadeva II (brother of Tripurari I)
Ambadeva revolted against Kakatiyas and killed Rudramadevi in a battle and was later defeated by Kakatiya Prataparudra.


Chandupatla inscription dated A.D. 1289, states that as the Kakatiya queen Rudramadevi departed to the world of the god, puvu mummadi a servant of a certain mallikarjuna nayaka, made a gift of land to the god chandupatle somanathadevara so that, both the Kakatiya queen and his master might attain sivaloka.

During Prataparudra's time the kingdom was annexed to the Tughluq empire in A.D. 1323.

1323 AD - 1336 AD : Tughlaq Dynasty
1325 AD – 1350 AD : Musunuri Nayaks
During Muhammad-bin-tughluq's period, Musunuri chief Kapayanayaka ceded a part of Nalgonda to Ala-ud-din Hasan Bahman Shah. Later the region came under the rule of Recherlas of Rachakonda and Devarakonda. During Ahmad Shah I's period the region was annexed to Bahmani kingdom.1350 AD – 1518 AD : Bahmani Sultanate
Jalal Khan in A.D 1455 declared himself king at Nalgonda, but it was a shortlined affair. The region was brought back to Bahmani kingdom.
From 1480 to 1485, Sitapati Raju titled Shitab Khan was the Bahmani governor of Rachakonda (near Narayanpur in modern Nalgonda district, Telangana). He seems to have taken advantage of the internal turmoils of the Bahmanis and declared his independence in 1503, ruling from the Rachakonda, Warangal and Khammam forts from 1503 to 1512

1518 AD – 1687 AD : Qutbshahis / Golconda Sultanate
Qutubshahi's : During the Bahmani Sultan Shihabud-din Mahmun's time Sultan Quli was appointed as tarafdar of Telangana. From him the regions was taken by his son Jamshid. Later the district remained under the control of Qutub Shahis till A.D.1687.1687 AD - 1724 AD : Mughal Empire

1724 AD - 1948 AD : Asaf Jahis
Nizam-ul-Mulk (Asaf Jah I) defeated Mubasiz Khan at Shaker Khere in Berar and ruled the Deccan in an autonomous capacity. This district, like the other districts of Telangana, passed under the Asaf Jahis and remained under them for a period of nearly two hundred and twenty five years.