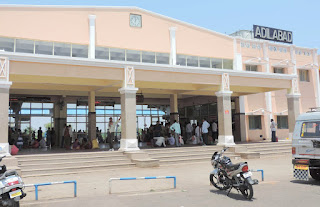 The original name of the Adilabad was Edlabad during the rule of Qutub Shahis. Edla is a Gond word
for people in woods.Its name was changed to “Adilabad” by erstwhile Islamic ruler of Bijapur, Mohammed Adil Shah.
Adilabad, the northern most district of Telangana and is gateway to the South from Central India.
This district was divided into 4 new districts Adilabad, Mancherial, Nirmal, Komaram Bheem Asifabad.

Irrigation
Medium Irrigation
Mathadivagu project is an ongoing medium irrigation project constructed across Mathadivagu located near the Waddadi village, Thamsi Mandal, Adilabad District.
The scheme is intended to irrigate an ayacut of 8,500 acres benefiting 12 villages in part of Adilabad,Thamsi and Jainath mandals in Adilabad district. The project also provides drinking water supply to 12,500 population in the en-route villages.

Medium Irrigation - Under Construction
Chanaka Korata on Penuganga river being constructed at a cost of 1,227 crore, is aimed to irrigate 50,000 acres.

The Lower Penganga Project is a Joint Project between the States of Maharashtra and Telangana on Penganga River, which is a tributary of Godavari River. The head works are located upstream of village Tadsaoli in Ghatanji Tabsil of Yavatmal District. It is proposed to irrigate an ayacut of about 2,37,600 Acres in Maharashtra and 40,000 acres in Adilabad District, Telangana.

Adilabad watersupply scheme from Mavala is worth mentioning because it runs on gravity, without the use 7of energy for pumping.It had become an citation to prepare project report to prepare water supply schemes to run on gravity to save alot of energy and there by cutting the costs of manufacturing potable water.