May 22, 2014
Kayasthas (1239 AD - 1297 AD) were the most powerful of all the Kakatiya chiefs ruling Panugallu. It is believed that these chiefs originally belonged to a class of warriors of Western India. This view has been further supported by inscription discovered in Chityala village in the Nalgonda district. 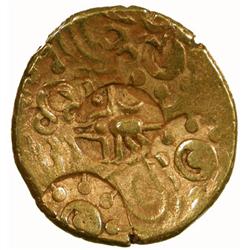 They were originally stationed by the king Ganapatideva at Panugallu as the governors of that part of the kingdom, Horsemanship and commanding of the cavalry were their specialized branches of war craft and most likely Ganapatideva brought the for the particular purpose of training his horsed and build up the cavalry force.
In the history of the Kakatiyas the Kayastha chiefs thus played a prominent role both as loyal subordinates and traitors.

1250 AD : Led a military expedition into the Seuna kingdom in the west at the command of his master Ganapatideva and made king Kannara or Damodara flee from battle field and was made the head of the seventy two branches of administration of the kingdom.

Most illustrious and powerful chief of the family.
Defied the authority of the Kakatiya queen Rudramadevi and proclaimed himself sovereign King of Marjavadi and other regions with Gandikota Manorathapura as capital and was responsible for the death of the queen Rudramadevi in a battle.

He is said to have killed Mallideva, probably a Chola Chief of Eruva and Kota chief, who was ruling the eastern part of Tripurantaka and Palnadu.

He made the Vaidumba chiefs Kesava, Somideva and Alluganga flee and captured several horses from them.
In the battle field he captured Mallikarjunapati, probably the Kakatiya general of Panugallu region and instead of killing him with sword took away his seven angas. In short, Ambadeva is said to have achieved the fame of defeating all the kings of Andhra on the field of battle.

Reinstated Manumaganda Gopala, the Telugu Choda king in Nellore. This Choda king was the enemy of Manumasiddhi II who was formerly helped by Ganapatideva.

All these victories of Ambadeva aimed at queen Rudramadevi were supported by Seunas and the Pandyas and declared independence in 1290 AD.

After the sad demise of queen Rudramadevi, Prataparudra with in a period of eight years could root out the Kayasthas and re-establish his authority in the entire kingdom.