May 17, 2014
The Cheraku Chiefs (c.1050 AD to 1323 AD) Similar to the names of other families of chiefs this family also got its name after the small town Cheraku in Eruva region and were subordinate/feudatory rulers of Kandur Cholas and later Kakatiyas from around.
Capitals : Jammulur (Nalgonda) and Amarabad (Mahabubnagar) regions. 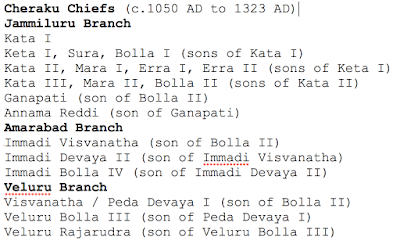 Cheraku family is the one which played an important role in the affairs of the Kakatlya empires and inscriptions embodying the fact come from Kurnool, Nalgonda, Mahaboobnagar and Krsna districts. They served as subordinates under Kakatiya Rudradeva, Mahadeva, Ganapatideva, Rudrama devi and Prataparudra periods.
Devarakonda of Nalgonda district, Cherakupalli village of Nakrekal taluq were their native places.
Jammuluru branch
Cheruku rulers of Jammuluru have an area comprising of Tungaturti Devarakonda, Huzurnagar, Nakrekal, Motkur, Kodad, and Miryalaguda taluqs of Nalgonda district.
Kata I was the founder of Cheraku Reddy dynasty
Mother : Kamambika
Kata I was the founder of the family and was said to have obtained Cheruku-12 included in Eruva mandala from king Eruva Bhima I (c.1050 AD) of Kandur Cholas.
Keta I, Sura I, Bolla I (sons of Kata )
Wives of Keta I are Tikkambika and Mallambika.

Kata II, Mara, Erra I and Erra II (Sons of Keta I)
Rendered military to Kakati Rudra in his conflict with Choda Cheifs, their erstwhile masters. Thus the changed their loyalty from Choda chiefs to rising Kkatiyas, who made them the hereditary maha-smanthas ruling the hill tracts of the present Acchampet taluk.
Kata III, Mara II, Bolla II (sons of Kata II)Among the sons of Kata II, Bolla II  was the most famous. Bola II is said to have served in succession, the Kakatiya kings Rudra, Mahadeva and Ganapati who favoured him with the lordship of amy regions.

He had became the ruler of Jammulur and helped Recharla Rudrasenani during his battles to save the Kakatiya kingdom. In exchange for this, Ganapatideva pre-sented him with Amarabad and velpur regions also.

Cheraku Bollayya Reddy built Keteswara, Koteswara, Mareswara and Suryadevara temples in Jalalpur (Jalalpur of Tirumalgiri mandal in Nalgonda dt. was their Jammulur). According to the Jalalpur inscription,
1280 AD : Ganapati, Visvanatha, Keta II and Immadi Visvanatha sons of Bolla II
Bollaya's descendants ruled these regions along with Jammulur. They issued 22 inscriptions there. They inform us about the structure of Telugu language at that period. They built temples at Kaluvakolanu, Jalalpur, Amarabad, Kurella, Udimalla and other places.

Two lines of Ganapayareddi and Immadi Visvanatha seemed to have been ruling over Kandurnadu region, spreading over Mahabubnagar, Nalgonda  and Kurnool districts between themselves as Mahasmanthas under the Kakatiya kings.

Amarabad Branch
Immadi Visvanatha (son of Bolla II) and his descendents made Amarabad as their capital. The Amarabad family must have governed the area around Achampet and Alampur taluqs touching the present Kurnool district.

Immadi Devaya II (son of Immadi Visvanatha)
Immadi Devaya appears in the inscriptions of his two sons from the Kalvakolanu region, a part of Kandurunadu.

Immadi Bolla IV (son of Immadi Devaya II)
Immadi Mallikarjuna nayaka son of mallikarujuna nayaka who was the minister of the king, made the gift of vrittis of wet land behind the Udayadity- samudra, arranged five special canal facility to that big land.
Maheswara Reddi (son of Immadi Bolla IV)
Veluru Branch
Visvanatha / Peda Devaya I (son of Bolla II) ruled with Veluru as capital, comprising Veluru, Goruvankapalli and Kurulla and some part of Nandikotkur taluq of Kurnool district under their control.
1293 AD : Veluru Bolla III (sons of Peda Devaya I)

Kayasta Ambadeva gave his daughter in marriage to Rajanna, son of Cheraku Bolla III along with Nandapura in 1290 AD.
Subordinate Rulers In Medieval Deccan - Racharla Ganapathi