Ringing rocks, also known as sonorous rocks or lithophonic rocks, are rocks that resonate like a bell when struck are found in the borders of Jangoan and Siddipet districts of Telangana.


The sonorous rock formation stretches over 25 kms and state government should declare this stretch as a heritage park and promote tourism like in Musical Stones of Skiddaw in the English Lake District; the stones in Ringing Rocks Park, in Upper Black Eddy, Bucks County, Pennsylvania; the Ringing Rocks of Kiandra, New South Wales; and the Bell Rock Range of Western Australia. Ringing rocks are used in idiophonic musical instruments called lithophones.

They are locally called Solamile Ene which are discoverd by reddy ratnakar reddy. Physicists say that 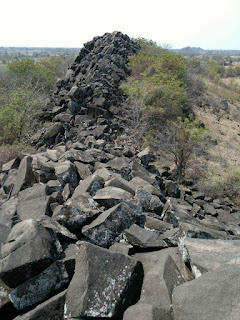 these rocks may have formed 200 million years ago due to lave ejecting on to the surface. The sound of the rocks depends on the density of ferric oxide in them. Usually, the ferrous percentage is is 9 to 12 percent in them.

History of ages is told along these rocks. There are cairns(locally known as rakasi gullu). Researchers found a stone age axe here. In Siddipet Verannapet researchers found groves which signify the sharpening of stone tools. “They belong to the Neolithic age".