Historian Dr Dyavanapalli Satyanarayana has claimed that he explored the site in the Buggagattu forest area with the help of the local Naikpod tribes.
He said cave paintings at Thaatimattayya are dated to be 13,000 years B.P. According to Satyanarayana, he came across the ten types of paintings drawn in five colours. 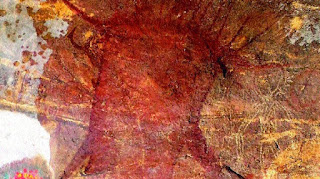 Dr Satyanarayana said ‘even today families of Naikpod worship the ‘Thaatimatayyah’ or Thaadu which means palm tree. One of the most striking features of the cave paintings is the drawings of perfect circles.

The Mesolithic Age people inserted the small chips of chert stone (one-inch long and centimeter width) in the full cleavage of fist fit logs to make knives, sickles, etc. sharp implements, in between 8,500 B.C. to 3,000 B.C.

It also appears that the caves were inhabited the people during the subsequent ages – Neolithic and Megalithic – as it is revealed by the human paintings with metal weapons and physical grinding stones, the historian concludes.

The prehistoric paintings were drawn at five places on the sand rock walls of the 50 yard long cave. The first space has only one petroglyph of an ox engraved in one foot length. The second and third spaces are the main chittaruvulu on which several tens of red ocher paintings were drawn.

The most important paintings of the spaces include the animals – horned bulls in rows, deer, antelopes, porcupine, and big lizard (Udumu). Some men were depicted as controlling the oxen with weapons.

The paintings also include a priest with thick red ochre halo around his head. Similar painting is also found nearby but in fainted red color.

The Naikpod tribals of the region, who invoke the deity Chittarayya for three days in every three years, call the priests as tappeta goollu (big dappulu in Telugu). The fourth and fifth spaces are expressing only fainted red ochre oxen, the historian explains.

But unfortunately most of the prehistoric paintings depicted on its wall spaces have been dimmed due to the recent distilleries cooked here for illegal liquor.


Only a half-foot long ox figure in red ochre color at one place and a foot-long ox in white color at another place are clearly visible on the 30 feet-long wall space of the cave.

But there appears every possibility to retrieve several paintings by way of scientific / expert chemical cleaning of the cave wall, he said.

With regard to the corroborative evidences of the paintings fortunately one can find hundreds of microliths in front of the caves.

Renowned historian Dr Dyavanapalli Satyanarayana found these sites near in the Buggagattu forests located at a distance of some 10 km from the district headquarters.

According to Dr Dyavanapalli Satyanarayana, the first cave is locally called Chittarayya Gundu is oriented towards northward and located at a distance of one kilo meter from the Buggagattu Anjaneyasvami temple in its north western corner.


While explaining about the second cave, Dr Dyavanapalli Satyanarayana said that Paatha Chittarayya Gundu, which is located in the deep forests at a distance of two kilometers from the first cave has projection towards northward is more than the first cave and hence it seems to have provided more safe accommodation to the humans.

Since the cave painting sites are located in a distance of ten km drive from the District Headquarters Mancherial the Government may develop the sites as historical and adventurous tourist sites so as to protect the rare and rich heritage of Telangana, Dr Dyavanapalli Satyanarayana appeals.