May 05, 2019
The annual Saleshwaram Jatara in the Nallamala forest area which comes under Amrabad Tiger Reserve is celebrated every year on Chiatra Pournami or the Full Moon Day in April and is open to visitors for only 5 days. 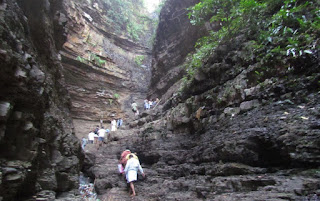 Breath-taking views of the layered rock formations, deep valleys with spectacular views only found in the most exotic locations of the world. Saleshwaram is located 16 km away from Farhabad forest checkpost and the temple comes under Appapur Gram Panchayat in Lingal mandal in Nagarkurnool district, Telangana, India.

The ancient Sri Ramalingeshwara Swamy temple of 6th century AD, located deep inside Nallamala forest, is about 1,000 feet deep inside a valley. The scene of the temple in moonlight is a treat to the eyes and a blessing to the soul. The temple lies next to a beautiful waterfall, coming down from a height of over 200 metres. The water flows through the temple and the devotees take a holy dip in it before taking a climb into the Garbhagudi. The linga is located in a cave which resides on a huge rock.

Reaching the temple involves a 16-km journey through the core area of the tiger reserve with another six kilometres of trek through the Nallamala hills.

The drive through the deep forest is sure to remain one of the best memories for visitors since they can see many wild animals like spotted deer, nilgai and wild boar.

The devotees have to walk at least three kilometers to reach the temple located down the valley. It is an arduous walk since there are sharp rocks all along the ground.

The devotees need to walk on narrow gorges of valley to reach down the deep valley where they can see waterfall falling from over 1,000 feet.

The devotes take a holy dip in the water and collect water in the bottles for those who could not make it as it is believed that it contains medicinal value.

Nature’s wonder which has been kept intact for thousands of years has once again started mesmerizing the devotees of Lord Shiva, who is devotedly called ‘Lingamaiah’ in this part of the world. The purest form of the nature located away from the mainstream society’s sight has opened its arms welcoming the devotees.

‘Sarveshwaram teertha kshetra,’ which later came to be known as ‘Saileshwaram’ and ‘Saleshwaram locally,’ which is a primitive religious site, located 30-40 kilo metre deep inside the Nallamala forests inside Amrabad Tiger Reserve where the rare Chenchu Adivasis have been living and serving Lord Shiva for ages.

As per local Chenchu mythology, ages ago, a Chenchu named Ravagadu had gone for hunting along with his wild dogs on the New Year’s Eve. When he couldn’t find water to drink anywhere, his dogs led him to a water body located near a cave, where water drops which looked like pearls were falling through the layers of rock formation. There, Bhole Baba had revealed himself to the Chenchu in bright gold and then vanished. That night, Lord Shiva appeared in his dream and asked him to erect a Shiva Linga and serve him.

The water which flows through layers of rock formed some thousands if not millions of years ago, carries with it all the medicinal values through the roots of nature, making it the purest form of water which has the ability to cure any disease. People have been visiting this nature’s wonder for ages and people believe that their sins can be washed-away here.

According to ‘Parvatha Purana,’ if a sinner enters this water body which is called ‘Shankhu Teertha,’ the water here becomes dirty but when a pure human enters, remains crystal clear. No wonder, while the water which comes from the top is crystal clear, once it touches the ground where devotees take bath, it changes colour due to plastic left over by pilgrims.
According to historic evidence, the Shiva Ling at Sarveshwaram had already become famous by 5th or 6th century. The layered rock formation in front of the sanctum sanctorum itself looks like a mammoth cave.