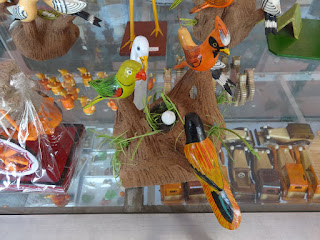 derived its name from that of a 17th-century ruler, Nimma Naidu, who had a great interest in art and toy-making. Back then, he collected about 80 artists and started a toy-making industry that came to add cultural significance to the town.

The Nirmal toy cluster has 60 families registered with the state rural self-help group, who keep the craft alive, making toys that are sold through state emporia. The cluster earns revenues in the range of Rs 3- 4 lakh per month.

Considering that the cluster largely produces toys, which is a non-essential item, there is always the danger of artisans losing interest in this traditional craft and moving on to more lucrative occupations. However, the award of the Geographic Indication (GI) status to Nirmal toys in 2009 was a morale booster for them.

The GI status acts as a flagging device that helps producers differentiate the Nirmal toys from competing products in the market. It has brought recognition and fame to the town, spreading awareness about the uniqueness of its products. At the same time, it offers protection from fake products. The goodwill around the GI products often translates into better pricing.
The town of Nirmal has been a prominent production centre for many such items, especially war cannons and toys from a very long time.

Toys are made for different uses like utility purpose, ornamental value etc., and some of the toys are made very artistically. One such glorious tradition is that of Nirmal toys.

Toys are those wonderful small things, which have been an integral part of our lives right from childhood, entertaining us and giving us our first set of learning in life.

A Glimpse of the Naqashi Art!

Nirmal craft is known for its age-old origin, dating back to the Kakatiya era. The recorded history states that it is 400-year-old rich tradition encompassing soft wood toys and attractive paintings, and furniture, occupying the pride of place in the larger context of Indian handicrafts. These toys are made of finely carved wood.

According to local legend, theNaqash families of Rajasthan migratedto this region during 17th century and it is they who brought this art.

The Naqash artisans produced these toys from the local variety of softwood initially, called poniki or white sander.

The usage of the ducocolours, makes the Nirmal toys popular for its typical shine and these toys are also painted in enamel colours, which brings a unique look to them.

Nirmal toys are also painted with an herbal extract, which imparts a golden sheen. These are also coated with exclusive and rich oil colors. The Mughal miniatures’ painting on the white wood poniki is considered very attractive and owned more by art collectors.

The motifs which are used in Nirmal craft are derived from the floral designs and frescoes found in Ajanta and Ellora forms and the Mughal miniature art.

The foundries which have been established here supplied key ammunition to the Nizam army of erstwhile Hyderabad state while the Naqash craftsmen, have contributed their rich skill in the form of the exclusive wooden toys. These are coated by duco paintings, which is a highlight of Nirmal Art. The dynastic legacy of Hyderabad Nizam’s is considered one among the manyreasons why this art had flourished far and wide. The strategic location of Nirmal town, connecting North and Central parts of India with South India has also contributed for the variety as well as popularity of this art from many centuries.

The cottage industry here comprises of Nirmal toys, Nirmal paintings etc., which is a main source of livelihood for the artisans involved in this trade. In fact, Nirmal toys are the pride of Telangana region and the town is considered synonymous with special toys, paintings and furniture.

The toys made in Nirmal constitute ideal gifts and souvenirs and hence they are widely popular. Nirmal toys are used for decorating living spaces, office spaces and art galleries. The tradition of toy making is also a matter of academic interest for other craftsmen, who visit the town from other parts of world.