December 09, 2017
The Narayanpet saree is made either of cotton or silk. 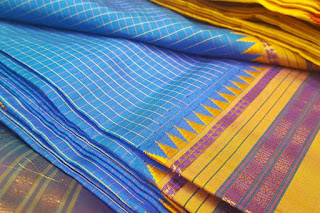 One school of thought states that in 1630 AD during Shivaji Maharaj’s campaign in the Deccan, the brightly coloured saris of the ladies caught his eye and thus the Narayanpet saree got its Royal Maratha Patronage. Other versions of the tale state that the weavers, who were part of Shivaji’s camp during a campaign, were the ones who stayed back and developed the form as we see it today.

Much before the world was made aware of the concept of a global village, the Indian Subcontinent had embraced the idea.

The merger of cultures of different princely states and regions in the country has produced some fantastic weaves and styles that are heralded to this day for their sheer beauty and exclusivity. The Narayanpet saree is one such example.

These sarees have had the privilege of enjoying the royal patronage of the Marathas. Regarded as the garment of the Gods, Narayanpet sarees were used to drape the idols of deities and worn exclusively by aristocracy for the longest time. The only treatment better than a royal one, is a godly one. Narayanpet sarees are all that and more.

There is a distinct style attached to the Narayanpet sarees, the sarees have a checked surface design with embroidery and the border or pallu have intricate ethnic designs such as a temple.

The borders and pallu of the Narayanpet Silk saree are given a contrasted look with small zari designs.

With designers like Shravan Ramaswamy acting as guardian angels and showcasing the Narayanpet silk sarees, the weavers have been hugely benefited by the surge in demand.
At any handloom or silk exhibition, Narayanpet silk sarees are a definite part of the showcase around the globe.
The popularity of Narayanpet sarees is enhanced by the fact that amongst all the Silk garments, this is the one which is most easily affordable. In recent times, even, designer boutiques have started stocking and selling Narayanpet silk sarees.

Going by historical records, in 1630 AD, the Maratha king, Chatrapati Shivaji traveled to the Narayanpet region where he camped for a while. When he continued on his journey, a few weavers stayed behind.

Later on, under the rule of Lokapalli Sansathanam, the production of Narayanpet Silk and Cotton sarees increased dramatically.

For producing the Narayanpet sarees, vegetable dyes are used. This is a unique process where eight sarees are made at one go on a loom. Thus instead of the standard 7 yards of fabric being mounted on the loom, 56 yards of Silk are mounted on the loom at a single time.

After the degumming, dyeing and drying process, the actual weaving starts. In the case of Cotton sarees, it takes one day to complete a saree, whereas a Silk saree takes 4-5 days to be completed.
In 2012, Narayanpet sarees got its Geographical Indicator (GI) registration with the government of India.

It is extremely hot in summer and cold in winter. If one has to deduce, the extremities of the weather could well have prompted the creation of the style of Narayanpet Silk sarees which is beautiful and rich to look at and is comfortable to wear round the year because of it’s light weight.

The early weavers who settled down in the Narayanpet region in the 17th century are the pioneers of this art. The skill has been passed down from generation to generation. The entire weaver community involved in this art is located only in Narayanpet.