Nirmal Furniture is furniture made in Nirmal, Adilabad, Telangana, India. It received Geographical 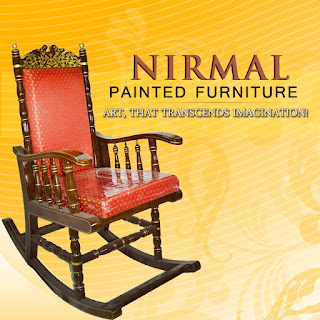 Indication rights in 2009.  It is handmade wooden furniture.

Nirmal Painted Furniture, a Brand in Itself!

Every region in India, is known for its unique culture and traditions, which have also influenced the local art. Nirmal town in northern part of Telangana state shares its unique, legendary identity in the arena of arts and crafts. The skill of the artisans and craftsmen of Nirmal town is well known, right from the pre-independence days.

The origin of Nirmal art and craft is traced back to the Kakatiya era. Nirmal works were influenced by the Indian Schools of Art like Kangra, Ajanta and also the Mughal miniatures. It is even said that once the Nizam of Hyderabad was accorded a grand welcome when he visited Nirmal. The artisans decorated the venue and the seat of the Nizam in a very grand manner with an intricately designed banana bud which was believed to have been suspended over the Nizam’s seat. This was unfurled while there was a cascade of golden petals showered on him.

In the last few decades, Nirmal work has been evolving in order to cater to new demands from the customers. One such exclusive arena apart from Nirmal paintings and toys is the Nirmal painted furniture, which is popular all over for its durability and outstanding look.

Nirmal painted furniture represents fine quality furniture. It is a unique form of hand-made wooden furniture, painted beautifully before they are offered for customers.

Furniture was once considered the choice of only the privileged but over the years, it has also become a common choice for all strata in the society. Therefore, many varieties of furniture have been launched in the market, but there are only few varieties which have been carried forward as a legacy. One such furniture type is the Nirmal Painted Furniture. The artisans of this town combine artistry in painting with great skills in woodcraft and they produce a variety of household and also office furnishings that lends aesthetic appeal to the surroundings. These include decorative Rajasthani and French style soft-sets, rocking chair, partition screens, chowkis, pen holders, wooden platforms, Pooja mandapams, trollies etc.

The furniture items are highly appealing and represent a unique set of decorative items, clearly reflecting the artistic and creative spirit of the artisans and furniture makers of Nirmal town. The skilled workers are considered the pride of Telangana, with Nirmal painted furniture made by them becoming very popular all over. These furniture sets are ideal to grace the living and office spaces. The painted furniture received Geographical Indication rights in the year 2009.