September 30, 2017
Cheriyal Scroll Painting is a stylized version of Nakashi art, rich in the local motifs peculiar to the Telangana. 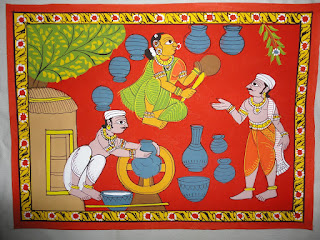 Several hundred years ago, Kaki Podagollu, a story telling community would travel through Telengana, singing and narrating stories, and depicting them in a visual format.

An hour’s drive from Hyderabad is the village of Cheriyal in Siddipet district, Telangana. Here is where the famous ‘Cheriyal Scrolls’ come from.
These canvas scrolls made from Khadi are hand-painted in a style unique to the local motifs and iconography. Characterised by a dominance of the colour red in the background, these brilliantly hued paintings even received Geographical Indication Status in 2007.

Painted in panels as a narrative, these are like comic strips from the past, depicting scenes and stories from Indian mythology and epics. Distinct in their style they immediately convey age-old Indian traditions and customs in a beautiful and engaging manner.

Of which, both the Lords Krishna and Rama are the most prominent and recurring. These painted scrolls were what kept the people of that era gone by entertained.

Originally used by the village bard as a visual aid to go with his stories and ballads, these scrolls have all but phased out with today’s more mainstream ways of storytelling and entertainment. Read cinema for even the written word is all but fading away.

Little surprise there, for now there aren’t many artists, who still practice this dying art form.

D. Vaikuntham, whose family has continued this tradition since the 15th century is one of the masters of this art.

With Cheriyal being the last village standing it has exactly three artist families, who still pursue this traditional occupation of the region.

Conventionally used as a tool for educating the illiterate villagers, Cheriyal Scrolls were once sociologically and culturally significant. From a scroll that once had up to 50 panels, they have now come down to a single panel, as these artists adapt to its modern use as wall art.

Vanaja & Ganesh run workshops and paint for a living. It was from them that we learned there was more to this art then just painting on scrolls.

Also coming from Cheriyal, are masks and dolls modeled along the same theme of ancient Indian mythology and local folklore. These masks range from as small as the ones sculpted and painted on coconut shells to as large as the ones molded in cement.

Both of them government recognised artists, they have had the honour of creating 10-feet wall murals from these masks in Nagpur for the President, Pranab Mukherjee’s visit some time ago.

Knowing that this art has but few patrons, this couple in a bid to give their daughters a good life, are educating them to take up a more modern vocation, while also training them in this traditional art during their time off from school.

Cheriyal Paintings can be easily recognised by the following peculiarities and unique characteristics:

Painted in vivid hues, mostly primary colors, with a predominance of red in the background, the paintings are characterised by the unbridled imagination of the local artisans who were not constrained by the academic rigour that characterised the more classical Tanjore painting and Mysore painting. For example, the artist hardly bothers about perspective in Cheriyal paintings and sets out the narrative by placing the relevant figures in appropriate order and position in the relevant background. The iconography of even the major deities like Shiva, Vishnu, etc. has a strong local idiom.

The subjects of these scroll paintings are easy to relate to – as the themes and stories are familiar – drawn from ancient literary, mythological and folk traditions. The common themes are from the Krishna Leela, Ramayana, Mahabharata, Shiva Puranam, Markandeya Puranam interspersed with the ballads and folk-stories of communities like Gauda, Madiga and so on.

The main narrative is spiced up with scenes from simple rural life - Women doing chores in the kitchen, men working in the paddy fields or boozing away in merry abandon, festival scenes, etc. are endearingly depicted.

The costumes and settings in which the figures are depicted are typical and reflect the culture of Andhra, where these paintings originated.

Within the narrow panels, proportion is created by depicting trees, or a building, a pillar with drawn curtains, etc. However more often than not, the proportion of individual characters is determined by their relative importance in that particular scene, with the most important character being the largest and most detailed and the lesser characters being smaller and less detailed.

The traditional art form became an inseparable part of the profession of the story-telling, balladeer community known as Kaki Padagollu. They displayed the scrolls and accompanied by music and dance went from village to village narrating and singing their ballads based from their rich folklore which was rooted in the Puranas and Indian Epics, enlivening many a lazy village evening.

In a typical recitation, the storyteller-balladeer would wander from village to village in a team of usually five people, with two to narrate the story while the others would provide a simple but hectic musical accompaniment with the harmonium, tabala and castanets. The stage would also be a simple affair (many times even to the extent of being a rough and ready fixture), erected on four poles with a horizontal bar on which the scrolls could be displayed.

The scroll would flow like a film roll. It was generally about three feet in width and went up to 40 – 45 feet in length, depending upon the story. The traditional scrolls are normally in vertical format, illustrating stories in a series of horizontal panels. A floral border in the middle separates the two panels, while the linear narrative is demonstrated by holding in both hands or suspending it from a tree or a building and continually rolling it. Like large sized comic strips, each panel of the scroll depicted one part of the story. Hence, a scroll would easily have around 50 panels. As the bard would narrate the story, the panel depicting that particular part of the story would be displayed. The choice of episodes and iconography of each deity was painted, keeping in mind the caste for which the scroll was made.

By virtue of its distinct traditional style and characteristics Cheriyal Paintings were recently given a Geographical Indications (GI) tag or Intellectual Property Rights Protection status in 2007.
The source of many stories, today, make for gorgeous gifts when framed.