April 08, 2017
Archaeologists have discovered an ancient menhir, a memorial from the Iron Age, in 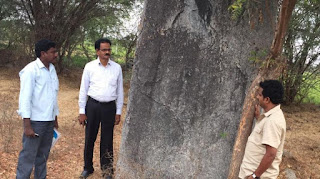 Padurivarigudem in Nalgonda district of Telangana.

The structure stands 11 feet high and was built as a memorial for warriors or tribal leaders in the region. Similar relics have been found in Guntur too.

E. Siva Nagi Reddy and his associates uncovered the massive menhir that, according to them, dates back to 1000 BC.

“Based on the information that we received from T. Saidulu, president of the local Vivekananda Youth Association, we visited the spot on Thursday and confirmed that the menhir belongs to the Megalithic period. It stands 11 feet tall, is six feet in width and goes six feet deep into the soil. The massive stone slab was installed during the Iron Age as a memorial to tribal lords or warriors in the region. It reveals the collective efforts of the ancient iron-smelting community,” he said.

The team of archaeologists also examined around 20 circular burial stones, also from the Megalithic age, near the Chinna Cheruvu, a tank located in Chandupatla village.

According to the experts, these burial sites and the marking stones are prone to damage because of active agricultural operations in the area. Mr Nagi Reddy said he has asked the state government to actively protect the unique menhir, as it stands testimony to the history of Telangana from the Iron Age.

Similar menhirs have been found in the districts of Nalgonda and Guntur. Though the site where the megalithic artefacts were uncovered was not of particular significance in the Kakatiya Empire, it lies close to Chandupatla, where Kakatiya ruler Rani Rudrama Devi is believed to have died.