April 08, 2017
Much to the delight of archaeologists and historians, a rare idol of Tara – the female Bodhisattva in 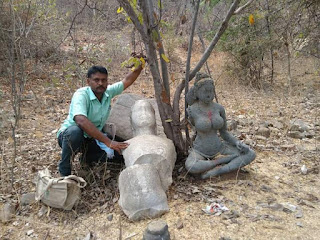 Mahayana Buddhism who appears as a female Buddha in Vajrayana Buddhism – was found at Ippagudem in Station Ghanpur mandal recently.

Archaeology and history enthusiast R Rathnakar Reddy found the black granite idol abandoned near the bund of a tank. He first mistook it for Yakshini of Jain mythology. But later, noted archaeologist and historian Emani Shivanagi Reddy confirmed it as Tara.

“It was Shivanagi Reddy who identified the idol as Tara. There is an engraved image of Buddha on the hair bun. The deity’s upper body is naked with large breasts, which is the most common description of Tara in Buddhist literature,” Rathnakar said.

Rathnakar also found a broken idol of Buddha near the black granite structure, which helped them confirm that it was Tara. Both the idols – three-ft-tall Tara and four-ft-tall Buddha – take historians and archeologists closer to the Buddhist era. It is believed that idol of Tara, which was damaged, belonged to 8th or 9th century AD.

Considering the value of the idol, Rathankar Reddy urged the State Archaeology and Museums to shift it to a museum at the earliest. He said Telangana had some followers of Buddha during the 9th and 10th centuries.

Telangana Jagruthi State secretary Sri Ramoju Haragopal visited the site at Ippaguem on Friday and urged the government to preserve the idols. Though Tara is said to be a tantric meditation deity mainly worshiped by the followers of Vajrayana Buddhism, there are several other stories about her. And some of them indicate that she belonged to Hindusim and seen as a form of Shakti.