The Salar Jung Museum is an art museum located at Darushifa on the southern bank of the Musi River in the city of Hyderabad, Telangana, India. It is one of the three National Museums of India.

The present museum building was constructed on the southern bank of River Musi, which is in close proximity to the important monuments of old city of Hyderabad like the historic Charminar, Mecca Masjid etc. The collections of the Museum and the library were transferred from Dewan Deodi to the new building in the year 1968, and two more buildings were added in the year 2000. 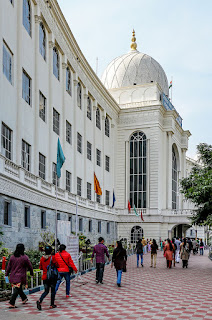 Collection of Objects
The Museum has a magnificent global collection of art objects and antiques not only of Indian origin, but mostly from countries Western, a sizable collection hails from Middle Eastern and Far Eastern origins. Apart from these, there is a Children's section, a rich reference library which contains reference books, large collection of rare manuscripts etc. Thus, this Museum has become popular, not only as a place of interest but also as an institution for education.

Out of the several rare objects, one of the important and interesting object collected by Salar Jung I was “Vellied Rebecca” an enchanting marble statue which was acquired by him from Rome in 1876 during his visit to Italy. The western collection are from England, Ireland, France, Belgium, Italy, Germany. A set of Ivory chairs said to have been presented by Louis XVI of France to Tippu Sultan of Mysore deserve special mention. A jade book-stand “Rehal” having the name of ‘Shamsuddin Altamish’, an archer’s ring inscribed with the legend Sahib-e-Quran-e-Sani, title of the Mughal Emperor, Shahjahan are masterpieces. A dagger and a fruit knife made in jade decorated with precious stones are said to belong to Jehangir and Noorjehan respectively. A good number of Indian Miniature Paintings in early style of Western India of 14th and 15th Centuries representing Krishna Leela themes are also form part of the Museum’s Collection. There are good number of Arabic and Persian Manuscripts dated to 19th century and Shah-nama by Furadausi are also among the valuable collection of the Museum. A rare manuscript entitled ‘Lilawati” on mathematics and an ancient medical encyclopedia transcribed in India is in the collection. Oil and water paintings form an important part of the European collections.

It has a collection of sculptures, paintings, carvings, textiles, manuscripts, ceramics, metallic artefacts, carpets, clocks, and furniture from Japan, China, Burma, Nepal, India, Persia, Egypt, Europe, and North America. The museum's collection was sourced from the property of the Salar Jung family. It is one of the largest museums in the world.

The Salar Jung Museum houses the largest one-man collection of antiques in the world. It is well known throughout India for its prized collections belonging to different civilizations dating back to the 1st century.

The furniture collection includes pieces from the time of King Louis XIV and Napoleon. Salar Jung III collected about 43,000 artifacts and 50,000 books and manuscripts out of which only few are displayed in today's museum.

Nawab Mir Yusuf Ali Khan Salar Jung III (1889–1949), former Prime Minister of the seventh Nizam of Hyderabad, spent a substantial amount of his income over thirty five years to make this priceless collection, his life's passion. The collections left behind in his ancestral palace, 'Diwan Deodi', were formerly exhibited there as a private museum which was inaugurated by Jawaharlal Nehru in 1951.

Old timers believe that the present collection constitutes only half of the original art wealth collected by Salar Jung III. His employees siphoned off part of it, since Salar Jung was unmarried and depended upon his staff to keep a vigil. Some more art pieces were lost or stolen during the shifting of the museum from Diwan Deodi to the present site

Later in 1968, the museum shifted to its present location at Afzal Gunj and is administered by a Board of Trustees with the Governor of Telangana as ex officio chairperson under the Salar Jung Museum Act of 1961.

The museum building, semicircular in shape with 38 galleries, spread on two floors, displays only a part of the original collection. The ground floor has 20 galleries and the first floor has 18 galleries. The exhibits on different subjects are displayed in separate galleries. Each gallery is huge and has many artifacts on display including ones dating back to the 4th century.

There are Aurangzeb's daggers belonging to empress Noor Jahan, emperors Jahangir and Shah Jahan, the turbans and chair of Tipu Sultan, furniture from Egypt, paintings on display. Among the sculptures stands out the world famous statue of Veiled Rebecca by G.B. Benzoni, an Italian sculptor, in 1876. Her beautiful face hazily is visible through a marble but gossamer veil. Equally captivating is a double-figure wood sculpture. It stands before a mirror and shows the facade of a nonchalant Mephistopheles and the image of a demure Margaretta in the mirror. The eastern section is of equal importance with its wide variety of silk weaving and different art forms, including layer wood cutting paintings, porcelain works and many more, dating back to almost 2nd century.

The museum has a famous Quran collection, from around the world in different fonts and designs, called the Quran Written with Gold and Silver. There are many more collections of religious books,as well as Arabic Quran.

A variety and array of clocks greet the visitor in the clock room. There are ancient sundials in the form of obelisks to huge and modern clocks of the twentieth century. Others in the range vary from miniature clocks which need a magnifying glass to imbibe their beauty and complexity to stately grandfather clocks from as far away as France, Germany, Italy, Switzerland and Britain including the musical clock Salar Jung bought from Cook and Kelvey of England. Every hour, a timekeeper emerges from the upper deck of the clock to strike a gong as many times as it is the hours of the day. The clock is an antique.

The Salar Jung Museum possesses a good number of clocks collected from different European countries such as France, England, Switzerland, Germany, Holland etc. The variety includes the Bird cage clocks, Bracket clocks, Grandfather clocks, Skeleton clocks, etc. The museum is also having some good examples of the clocks of the contemporary period of Louis XV, Louis XVI, and Napoleon 1st of France. The most important clock which attracts the greatest number of visitors everyday is however, a British Bracket clock. It has got a mechanical device by which a miniature toy figure comes out of an enclosure and strikes the gong and then returns to the enclosure at each hour.

The Indian Parliament has declared the museum an Institution of National Importance.

Activities of the Museum:
The Museum is regularly organizing special exhibitions and workshops in collaboration with International Museums and organizations. The museum publishes guide-Books, brochures, research Journals, and books on selected subjects in English, Hindi and Urdu languages. Seminars and workshops are being organized on special occasions such as – Birthday celebrations of Salar Jung III, Museum Week, Children’s Week etc., as part of its educational activities. As one of the museums of “National importance” in India, the Salar Jung Museum is meant to function as a cultural centre through its exhibits, research projects and planned activities as a cultural centre both in educational and as a centre of national integration.