City Museum is a museum located in Purani Haveli, Hyderabad, Telangana, India situated in the palace. 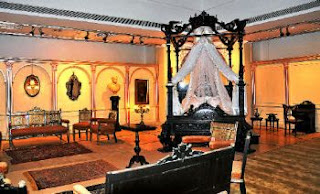 City Museum is the first of its kind in India, which focuses on the history of the city of Hyderabad, from times beyond its inception to the present day.

It presents glimpses of the historical, commercial, cultural and social fabric of the beautiful city that is Hyderabad from its foundation up to the present times.

A touch screen multimedia kiosk provides quick information about the origin, popular legends, places worth visiting and landmarks of 50 Mohall’s (localities) and other trivia of Hyderabad in Hindi, Urdu, Telugu and English.

The area that constitutes Hyderabad today was inhabited four thousand years ago. The city Museum retraces some of those steps back to Megalithic times, to the Kakatiya’s of Warangal , to when Golconda one of the world’s leading diamond trading centres attracted tradesmen and travellers from the world over and was evocative of incredible glamour , unparalled riches and romantic splendour.

The documented history of Hyderabad begins with the establishment of a civilian population in the fortress of Golconda in the times of the Kakatiya rulers. The civilian population grew in the Bahmani period. Under the Qutub Shahis, Golconda became a capital city of prosperous, cultured Sultanate. Then a new garden suburb outside the fortress was designed and built in 1591 and the name of Hyderabad Tirot appeared. The Mughals conquered Golconda and the city suffered a period of decline. Then the Asaf Jahs ruled for over two hundred and fifty years. The city of Hyderabad again became a capital and flourished. Under Mir Osman Ali Khan , the seventh Nizam of Hyderabad, the city made rapid strides and perhaps the biggest transformation occurred during his reign . Post – Independence Hyderabad continued to prosper as the capital city of the newly formed Andhra Pradesh. In the past two decades there has been tremendous growth and the city has witnessed modern and exciting developments contributing to Indian Revitalisation.

The growth of the city is traced through seven specially designed maps that use Golconda as a Reference. These maps depict important periods in the development of the city and indicate the city progression in each of these phases the maps traces the progression from 13th century to 21st Century.

The Museum unfolds brief glimpses into various aspects of the city serves, early evidence ,Trade and Commerce, Arms and Weapons, the fabrics of Golconda, Post and Communication, Coins and Currency, Transport, Medicine, Education, arts and crafts, architecture, culture and the cuisine of Hyderabad through original objects, charity, Photographers and explanatory notes.

Former prince Muffakham Jah, chairman of the Nizam's Jubilee Pavilion Trustwhich established the museum said, "This is an extension of the Nizam Museum on the same premises which was opened in 2000.

The research and groundwork for this venture took two years to complete and involved contributions from many historians. The museum showcases evidence that humans inhabited the city nearly 4000 years ago and also displays various achievements of the people over the years." He further added, "One can find the answers to many intriguing questions about the city in this museum. I hope it will generate the interest of both residents and tourists."

Among the exhibits at the museum are Neolithic pots discovered at Patancheru.

The purchase of one ticket will permit entry to the Nizam Museum, the City Museum as well as a glimpse into the gigantic wardrobe of the sixth Nizam.