Nizam Museum or H.E.H Nizam's Museum is a museum located in Purani Haveli, Hyderabad, Telangana, India is a  palace of the erstwhile Nizams.

In the heart of old Hyderabad, a few lanes away from the iconic Charminar, lies a fascinating collection of articles belonging to the seventh Nizam of Hyderabad, Mir Osman Ali Khan. 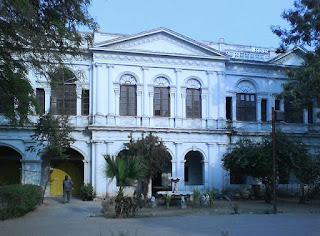 A 1930 Rolls Royce, Packard and a Jaguar Mark V are among the vintage cars on display.

The museum also features the wardrobe of the sixth nizam, a 150-year-old manually operated lift, and 200-year-old proclamation drums.

The museum was opened on 18 February 2000 by the Nizam Trust to the general public.

The collection has been recently housed in the HEH Nizam Museum, located in the stately “Purani Haveli”, which holds a special place for the last ruling dynasty as several Nizams were born and spent parts of their lives there.

“The HEH Nizam Museum was created by the Nizam trust as a tribute to the development that Hyderabad state saw during Osman Ali Khan and his father’s rule. The Nizam put together a vast collection which he kept adding to, later making a trust to hold and display this collection to the public,” says Bhaskar Rao, chief curator of the museum.

During India’s partition, the state of Hyderabad was the largest princely state in the country and with a population of roughly 16.34 million people, had its own army, airline, telecommunication system, railway network, postal system and radio broadcasting service. As one enters the rather ordinary-looking museum, there is a plethora of history from perfume bottles and cups studded with pearls, to a model of the Arts College, Osmania University – which was declared open by the Nizam on December 4, 1939.

The entire museum, which The News Minute visited, is covered with displays and old wooden wardrobes, besides models made of silver of all the landmark buildings in Hyderabad, and citations in Urdu about Mir Osman Ali Khan.

The real eye-catching piece is however, a golden throne placed at the end of the room. The throne was used for the Silver Jubilee celebrations of the Last Nizam.

The museum also features the infamous wardrobe of the sixth Nizam, Mir Mahboob Ali Khan, besides a 150-year-old manually operated lift and 200-year-old proclamation drums. Khan was rumoured to have never worn the same clothes twice which resulted in the 72m-long, two-storey Burmese teak wardrobe at the end of the museum. The cupboard, which is said to have 130 doors, also showcases the clothes worn by his wife and a huge collection of footwear.

The main building which accommodates the Nizam’s museum is flanked by two long wings running parallel to each other. The Nizam’s collection is just one of the wings.

The other is the Hyderabad City Museum – “an extension built in 2012,” the aging curator adds with a smile. “While the Nizam Museum offers a glimpse into the 19th and 20th century, the city museum manages to trace the history of the area to more than 4,000 years ago. (No exclamation marks please)

We don't know what Hyderabad was called before 1591, but pots excavated in a recent dig a few years ago, show that we all go back a long time,” Rao says. The galleries of the City Museum give the visitor a perspective of how Hyderabad evolved over centuries as it traces the growth of civilization in the area. Split up into different subsections - transport, art and culture, crafts, science and technology, jewellery, medicine, cuisine, architecture and so on, it is adorned with breathtaking history.

The artifacts stored here are priceless and photography is banned in this segment of the museum to avoid any untoward accidents. There is also a chronological timeline which shows the prominent landmarks springing up like the Golconda Fort - which is the oldest followed by the Qutb Shahi Tombs, Purana Pul, Charminar and Mecca Masjid.

When asked about how many people visit the museum, Rao says, “The museum still gets a considerable amount of visitors daily but as cities grow, children are not able to comprehend the importance of history. People go to shopping malls instead of museums nowadays.” The chief curator also adds that a majority of visitors come from other places rather than Hyderabad. “Only a minority of the visitors are from Hyderabad. Everyone is moving forward at a rapid pace and I agree that development is needed, but should it be at the price of forgetting our own history?” Rao asks