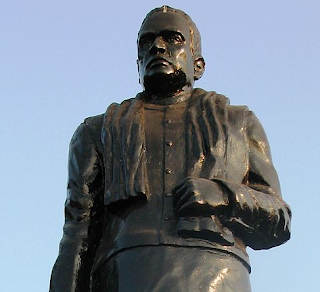 Suravaram Pratap Reddy was a social historian and one of the pioneers of Telangana literature, a
scholar in Sanskrit, Telugu, Urdu and English languages.

He had tremendous admiration for Telangana Telugu. He is famous for his research articles, novels, poetry, story writer, and literary critic.

Pratapareddy native village is Itikalapadu and completed his primary education at his uncle Ramakrishnareddy's residence in Kurnool. He studied Sanskrit literature and grammar under the guidance of Vellala Sankarasastri. Later he finished his FA at Nizam College, Hyderabad. Then he obtained BA and BL degrees from Presidency College, Madras and became a lawyer for a short while.

He was moved by the sad plight and illiteracy of Telangana people. He was disturbed by the fact that Urdu was the ruling language and Telugu had no respect. There were no facilities for Telangana Telugus to study in their mother tongue. Raja Bahaddur Venkatramareddy, the police commissioner of Nizam State, employed him as the secretary of Reddy Hostel in Hyderabad. Pratapareddy set up a very good library in the hostel and brought activity and discipline among the students.

He quit his job at Reddy Hostel to launch a Telugu language journal "Golconda" in 1925 for the benefit of Telangana people. Golconda was published twice a week. In one of the editorials of Golconda he wrote that the purpose of the journal was two fold: 1) to serve Telugu language in Telangana and 2) to help develop everybody in Telangana without any tribal/caste prejudices.

Many of his articles appeared in journals like Sujata, Shoba, Bharati etc.

Golkonda Kavula Sanchika , a collection of poems written by 350 Telangana poets brought out by Suravaram Pratap Reddy in 1942. Suravaram brought out this special issue of poems when poets from Seemandhra reportedly questioned the existence of Telugu poets in Hyderabad dominion.

His work Andhrula Saanghika Charitra is considered the best social history, which won the first award from central literature academy was printed again and again for 7 times and the same has been translated into Hindi by Yarlagadda Laxmi Prasad. S. Pratap Reddy represented the State assembly from Wanaparthy constituency in the district in 1953.

He was the first President of the famous fighting organization of the people - Nizam Andhra Mahasabha - held in 1930 at Jogipet.