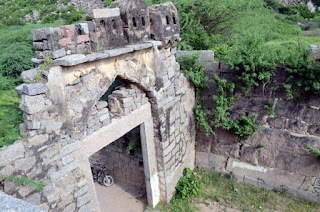 The fort is constructed on a huge granite hill that made it difficult for anybody to climb it from any side. On the way to the top of the hill, an inscription carved on a boulder mentions that there are two ways to the fort. At the entrance of the fort there is a Dargah of Molang Shah Wali, a muslim saint. It is reported that the original name of the village was Mudugar. It appears to have been renamed as Molangur after the name of the Muslim saint Molang Shah Wali.

In addition to the Dargah, the fort also houses two temples dedicated to Lord Shiva. There is a beautiful tank on the fort and also on its foothills along with a well called Doodh Bowli (milky well)

The ramparts of the fort still bear the remnants of garrisons, stables that remind it's glorious past. The ruined walls, gates, bastions, moatsculptures and several other remains in the fort still attract the attention of the visitors.

At a distance of 1.2 km from Molangur Bus Station, 31 km from Karimnagar and 169 km from Hyderabad.

Molangur Fort under threat
Rampant granite quarry operations in the vicinity of historic Molangur Fort constructed by Kakatiya Kings in Shankarpatnam mandal is taking a heavy toll on the structure.

Listed as protected site by the Archaeological Department, the fort was constructed on a hillock by Voragiri Moggaraju, one of the chief officers of Prathapa Rudra of Kakatiya dynasty. It was constructed as a transit halt for Kakatiyas while travelling from Orugallu fort in Warangal to Elgandal fort in Karimnagar.

The fort is constructed on a huge granite that made it difficult for anybody to climb it from any side. There is a beautiful tank on the fort and also on its foothills. A special well called ‘Doodh Bowli’ (well as pure as milk). Time has taken a heavy toll on the fort which is damaged and polluted by granite quarrying. Several megalithic burials inside the fort have been destroyed.

Molangur sarpanch Tirupathaiah said blasting undertaken for quarrying granite damaged the fort. There was severe sound pollution due to rampant granite quarrying. Locals were also falling ill due to the dust raised by the quarrying. He lamented that despite several representations to the district administration, no action has been initiated so far.

Telangana Bhoomi Rakshana Sangham convenor S. Sujatha said that hoisting of national flag on Golkonda fort alone would not solve the purpose of protection of ancient history and heritage of Telangana. The government should also protect other ancient structures.

Demanding that the government stop quarrying, she urged the government to declare all hillocks as tourist spots so that revenue could be generated from the heritage structures. Retired principal of Government Degree College Jagtial and historian. Dr Jaikishan said that there was no check on quarry operations, he said and added that the fort would collapse if frequent blasting and quarrying went on unchecked.

The fort is 13 kilometres away from Huzurabad and 16 kilometres away from Jammikunta railway station. Thus, it is very convenient to reach this marvellous historical fort by road or by rail.
Sources
http://www.thehindu.com/news/national/telangana/molangur-fort-under-threat/article6301492.ece