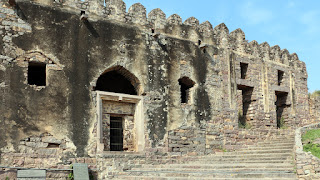 Nagaruru, Previously it was known as Nagaroor had been one of the chief townships of Sabbinadu, once ruled by local chiefs, who were eventually vanquished by Kakatiya king Rudra in 1170 AD and appointed Gangaraja to administer it.

This city was alive with the emergence of Kakatiyas after the reign of Vemulawada Chalukyas, Kalyani Chalukyas for five centuries from 8th-13th centuries and its people as a centre of faith, a religious centre, a political centre, a spiritual centre also as a capital of morality, reaches to its extinction.


This great capital turned to ruin which was having about 400 temples and now only three are visible, among these three two are already in ruins and one is about to be ruined, which is situated about 8 km from Karimnagar opposite to the Prathima Institute Of Medical Sciences and close to the Karimnagar Railway Station.

The ramparts of Karimnagar's Nagnoor Fort were once alive with the thumping sounds of a bustling town and the people of Kakatiya dynasty.

The fort stands as a testimony to the majestic powers of the great Kakatiyas. The Nagunur Fort is considered to be one of the most important forts of the glorious Kakatiya dynasty. The excavations have brought to light many ruins of a cluster of the Kalyana and Kakatiya temples.

The Nagunur fort is home to a host of important temples dating back to the 12th to 13th century such as Vaishnava Temple, Shiva Temple, Main Trikuta Temple, and the Ramalingala Gudi Temple.

The inscriptions found at the fort testify its importance as both political and religious center in the medieval times. Inside the fort, there is cluster of ruined temples that were erected during the periods of Kalyani, Chalukya and the Kakatiyas.

The beams of the temple have sculptured images of musicians playing on Mridangam and other instruments. Panels are carved with visuals of dancers in graceful poses.

A group of ruined temples has attracted tourists attention time and again. The origin and style of these temples can be traced back to the era of the Kalyani, Chalukyas and Kakatiyas. However, it is strongly believed to have been built during 1200- 1300AD under the patronage of the Kakatiyas. At one point of time the place was believed to house around 400 temples. Hence it came to be known as Nalugunovalu. This was later changed to Nagunur.

The biggest and the most prominent among these is the triple-shrine temple of Lord Shiva.The temple is made of red stone and comprises three shrines of Lord Shiva. The shrines are placed on a raised pedestal or Upapitha. The most enchanting part of the temple decor is the intricate and detailed sculptures gracing the frames of the doors and the beams resting on the central pillar. The detailing of these sculptures is exquisite. It tends to defy its age. There is one sculpture in particular which finds mention in several places which displays musicians surrounding Gods and Goddesses playing various musical instruments. One is also shown playing the Mrigandam ( an Indian drum).

The main entrance of the temple faces North. The three shrines face the other three directions. The temple lies within the precincts of the Nagunur Fort. The fort was once the seat of power of the Kakatiyas. Its interiors which would once echo the sounds of a lively and bustling city today chants the silent agony of ruins and debris. Several other temples in decrepit state lie strewn on the Telangana State highway from Karimnagar to Rayapatnam. Buried under administrative delay, the temples, which were once the source of great activity, have today turned into a mute audience waiting for the healing touch.

– The ruined temples bearing the splendid motifs are architectural marvels which attract tourists from near and far.

– The Nagunur Fort and the temples don the place with a unique character which is difficult for any tourist to resist.

– Distance from Hyderabad to Karimnagar is 162 km

– Distance from Warangal to Karimnagar is 68 km

– Distance from Nizamabad to Karimnagar is 147 km

Nearby by Tourist Attractions:

Karimnagar provides a range of hotels, guest houses, lodges and tourist rest houses which provide comfortable accommodations for tourists. The accommodation facilities fit into every budget and are strategically located in order to provide tourists access to their preferred place of visit in Karimnagar.

Some of the Good Hotels in Karimnagar are:

– Karimnagar can be easily accessed by road. It is well connected to Warangal, Nizamabad, Medak and other parts of the state.

– The nearest international airport is located at Hyderabad which is around 165 km from Karimnagar town.

– Nagunur Fort is located at a distance of 8 km from Karimnagar Bus Stand and can be easily accessed by public transport.

Karimnagar has its own railway station which connects Karimanagar to major cities of Telangana.