The Gandhari Fort is believed to have been built by tribal kings who ruled over this region, by taking assistance from Kakatiya rulers, some 1,000 years ago. It houses the ancient temple of Maisamma. Similarly, it contains idols of Kala Bhairava Swamy, Lord Siva, Lord Ganesh and Hanuman, idols carved out of rocks.

Archaeological work suggests that construction of the fort was begun early as the Rastrakuta era (prior to 1200 A.D.) and continued until 16th century. 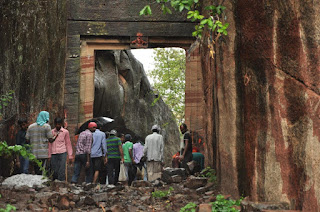 It is located on the sand rock hills. It is 270 kilometres (157 mi) north east of the state capital, Hyderabad.

The fort was built within a thickly forested area which has a wealth of plant species which includes many medicinal herbs. The fort has not been fully excavated and is still partially covered by forest.

Mahankali Jatara (quarry jatara) is conducted every year which attracts more than 10,000 people. Gandhari maisamma jatra is done in the temple on the fort of Gandhari for every 2 years and tribal people from Vindhya region i.e maharastra, Chattisghad on the other bankside joins it.

The Mancherial – Bellampalli highway passes close to the fort,  which is 3 kilometres away from the Bokkalaguttta village.

All the sculptures, gate (thoranam) and pillars were constructed in Kakatiyas style. By observing the decorations, the shanku and chakra, beside every sculpture we find that they are dedicated to Vishnu, while Kakatiyas worshipped Shiva. The script of Shree Oddi raju anantha raju shasanam. Basically it belonged to the Kingdom of Gondus, but later on Oddi raju anantharaju occupied it. Later it was controlled by the Qutub Sahi Sultanate (1518–1687) and in 1656, the ruler of Golconda.

The forest in the area of the Gandhari fort is an important source for medicinal plants. Large numbers of local medicinal people collect the plants and offer them for sale in nearby towns. Students also visit the area to identify these plants and make herbarium specimens.

In view of this importance for medicinal plants, it has been suggested that the forest of the fort area be declared a Medicinal Plants Conservation Center.

The fort, which has Gandhari Maisamma temple has three main entrances to the fort, which are carved out of stone. The fort contains idols of Kala Bhairava Swamy, Lord Siva, Lord Ganesh and Hanuman. The way to the fort atop the hill was built in such a way that horses and elephants can trek the hill.

There are three wells, which never dries up even during severe summer. There is also another well named as ‘Yenugula Bavi’ (Elephants Well).

The well is designed in such a way that elephants and horses can quench thirst by reaching the well through steps.


Maisamma Jatara
Gandhari Maisamma temple is located at the fort. Tribals residing in Mancherial, Adilabad, Nirmal, Kumram Bheem Asifabad and many other districts across the State gather during the fair held in the sacred Magha masam, a holy month of Hindu calendar year.

The jatara was suspended in 1998 due to a murder incident that took place during the celebrations.
Tribal leaders, various people’s organisations and public representatives appealed to the successive governments for renewal of the festival.

Thanks to the positive response from the TRS government, the festival had returned in all its pomp in 2016 after 17 long years.

With the funds released by the government, a BT road was laid up to the adobe of the deity, drinking water points were set up at several places and an approach road to the hill was also laid.