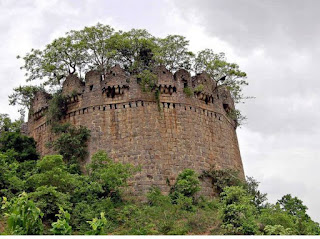 Little known Koulas fort dating back to the fourteenth century, spread across six square km has the potential of becoming a much sought after tourist destination.

Situated on the border of Telangana, Karnataka and Maharashtra States, 180 km from Hyderabad and 100 km from the district headquarter town of Nizamabad, Koulas fort can be a tourists’ delight as a quick getaway for one day. The trip can also be tagged on with a visit to the historic Nizamsagar, the irrigation project built by the seventh Nizam on the Manjira, and Koulasnala projects close by.


A good blacktopped road from Hyderabad passing through Sangareddy-Andole-Nizamsagar-Pitlam takes tourists to the historical fort built by the Kakatiyas in four hours. If the travellers start from Hyderabad after breakfast, they can stop at Nizamsagar project, once the lifeline of Nizamabad district, to view its grandeur. Although the two guesthouses built when the project was inaugurated are in a dilapidated condition, tourists can spend some time, have lunch and proceed to Koulas fort.

Constructed in the semi-Dravidian style, the fort is situated on the south eastern Balaghat range at an altitude of about 1,000 ft, encircled by the Koulas stream. The stream used to stand as a natural moat to the fort. This apart, the thick cover of vegetation, when viewed from the fort, is a feast for the eyes.

History has it that earlier this fort was conquered by Muslim rulers and later occupied by the Nizams. Currently, all the structures inside the fort are in ruins. However, the Sivalayam, a dargah and a grain store built with boulders, though camouflaged by wood, remain intact.


The fort walls were built in a three-tier system of defence. A huge cannon still rests atop the bastion. It has 52 small and big bastions along with two main entrances. The fort temple and dargah were declared as protected monuments by the Archaeology Department.

The Kasikund temple constructed on the patterns of the Kasi temple by the Rajput kings has a fresh water spring. There are three other temples dedicated to Rama, Hanuman and Balaji. Behind the fort is the Ashtabuji Mata also known as Jagadamba Mata temple. The Rajput kings used to pray there before going to battle. Inside the forest there are two mosques.

Two natural tanks inside the fort used to serve as perennial water sources. The descendants of Rani Sonekunwar Bai, who ruled the area in 19th century, live in Koulas village and leased out cultivable land around the fort till some years ago. The fort in the 16th century fell to the Rajput king Raja Gopal Singh Gaur. He later captured Kandhar and Mahore forts now in Maharashtra.

The two gateways of the fort have the insignia of the Kakatiya dynasty. In the beginning of the 20th century there were more than 10 cannons made of alloy metal and steel. Most of them were shifted to Nanded, Bichkunda and Madnoor police stations. The Navgazi tope (cannon) with its splendid work and metallurgy is a rare one. The Koulas dam is about 20 km away from the fort and attracts a large number of birds in winter.

The credit for bringing the fort into focus goes to former Nizamabad Collector G. Asok Kumar, who prepared an action plan to promote spiritual, eco, cultural and adventure tourism in and around this fort.In India, the largest recorded cannon is about 23 feet long and is located in Koulas Fort in Nizamabad, Telangana State.

Col. Ajit Kumar Singh, who belongs to the Koulas dynasty, also pitched in with his efforts to get it recognised as a tourist destination. Barring the initial euphoria, nothing much has fructified and bad roads and lack of hotels and restaurants are a huge drawback. But, for tourists looking for some adventure and those interested in heritage this fort is a ‘must see.’

Jagadamba Bhavani: the deadliest cannon
The cannon, which is 23 feet in length and weighs 70 tonnes, is made of iron and other alloys and is larger than that of Jaivana tope (20 feet length and 50 tonnes) on Jaipur fort and one on the Bijapur fort (15 ft and 55 tonnes) which were earlier considered the bigger cannons in India. The Jagadamba Bhavani tope has a caliber of 16’’ and explosive head of 150 kgs whereas its rival topes have 11 inches and 18 inches and 100 kg explosive heads respectively.

Statistics above reveal that the Jagadamba Bhavani cannon is undoubtedly the largest and deadliest cannon in the world. This is a rare example of technology and metallurgy which was unknown to mankind in 1725 AD when it was set up on the fort. It sounds like a bell when hit by a hard object and has two parts -- cannon and primer.

Explaining the significance of the cannon, Col. Ajith Kumar Singh Gaur, the great grandson of Raja Padam Singh and an expert in guns in the Indian Army, said that eight elephants and a few hundred men were pressed into service to take and place it on the burz in those days.


Iron and stone balls were used as projectiles. First, iron and stone balls were put inside the cannon and then 150 kg gun powder was stuffed in it and primer. The primer was lit by a wick and the firer used to jump into a big water tank built next to the cannon to save himself from sounds, burns and concussion effect. It was tested few times and declared battleworthy, says Mr. Singh, who has a doctorate in metallurgy and teaches the subject in defence.

Performing puja, a couple of days ago to the cannon, as has been their family tradition, on the fort, which was 150 kilometres away from Hyderabad city on the Hyderabad-Nanded road, he said because of the cannon set up with the blessings of Goddess Bhavani, no enemy dared to attack the fort in the last three centuries.

He was the associate of the Asaf Zah-I (first Nizam). The Nizam granted him Koulas, Khandar and few parts in Maharashtra for his bravery in the battle of Balapur and Shakkar Kheda. Raja Gopal Singh renovated the fort and built the Jagadamba Bhavani temple on the fort which is some 400 ft high.